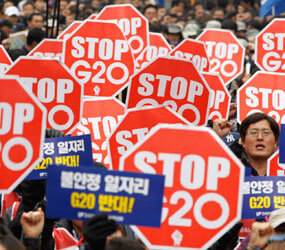 In a letter to South Korean President Lee Myung-bak, who also is president of the summit, the pope told the G-20 leaders he was hopeful that the solutions adopted will achieve “the authentic and integral development of man.”

“The summit seeks solutions to quite complex questions, therefore requiring the cooperation of the entire international community, based on the acknowledgement … of the primary and central value of human dignity,” the pope wrote.

The letter was released at the Vatican as well as by the Catholic Bishops’ Conference of Korea as the summit began.

Acknowledging that G-20 leaders face complex questions because of the continuing global financial crisis, Pope Benedict encouraged the leaders to consider the needs of all nations as they craft their plans.

The pope said that the decisions made in Seoul will affect future generations, and he encouraged participants to weigh the consequences of their actions as much as they have studied the reasons for the crisis to develop.

“The world’s attention focuses on you and it expects that appropriate solutions will be adopted t overcome the crisis, with common agreements which will not favor some countries at the expense of others,” the letter said.

Lee’s office welcomed the letter, considered the first ever sent by a pope to a G-20 president.

“The letter shows the pope’s expectation on the role of South Korea in the international community,” the office said in a statement.