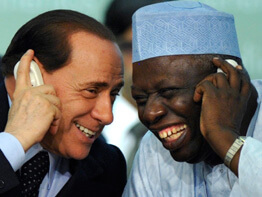 ROME – Pope Benedict XVI urged the international community to combat the causes of hunger, saying starvation and malnutrition were unacceptable in a world that can produce plenty to eat.

Any further increase in global food production will help alleviate hunger “only if it is accompanied by the effective distribution” of the food, which needs to be “primarily channeled to satisfy essential needs,” Pope Benedict said in a message to the World Food Security Summit in Rome.

“The great challenge today is to globalize not only economic and commercial interests, but also the expectations of solidarity,” he wrote.

The Vatican’s secretary of state, Cardinal Tarcisio Bertone, read the pope’s message during the June 3 opening ceremony of the three-day summit.

Numerous heads of state and nongovernmental organizations attended the high-level summit, dedicated to addressing the current world food crisis, the challenges of climate change and the development of biofuels.

The U.N. Food and Agriculture Organization, which hosted the summit, said approximately 850 million people suffer from hunger around the world. Changing weather patterns triggered by climate change are expected to adversely affect the vast majority of those who are already struggling to find enough to eat, it said.

In his written message, the pope said, “Hunger and malnutrition are unacceptable in a world that, in reality, has sufficient levels of production, resources and know-how available to put an end” to these social ills and their consequences.

The lives of millions and the stability of many nations are threatened by “new hidden dangers,” he said, adding that increasing globalization, protectionist trade policies and speculation in foodstuffs all contribute to the food problem.

The pope praised nations’ efforts to work together to address the global food crisis and said he recognized the difficulty and complexity of the task. But he said it is impossible to be “insensitive to the appeals” of those who cannot get enough to eat in order to survive.

Solutions must respect the dignity of each individual, he said, and “exclusively technical or economic” approaches cannot prevail over the obligation to bring justice to the poor and hungry. Emergency food aid and “modern technology alone will never be enough to make up for the lack of food,” because they do not address the primary cause of hunger, he said.

Hunger is caused by individuals refusing to recognize their obligations toward others, he said. This attitude results in the “dissolution of solidarity,” the justification of a life of consumerism and maintains, if not deepens, the social and economic imbalances in the world, he added.

“If you do not feed someone who is dying of hunger, you have killed him,” the pope said, quoting the “Decretum Gratiani,” the 12th-century collection of church legal texts.

“Everyone has a right to live,” he said, therefore people must aid those in need and help them gradually become capable of satisfying their own food needs.

More than 250 faith-based organizations called on summit leaders to eliminate the root causes of hunger such as poverty and unjust social structures.

In a statement released to journalists, the faith-based coalition, which includes dozens of Catholic religious orders and nonprofit organizations, echoed the concern the pope expressed in his message for the protection of small farmers.

Rising food costs have been linked to the growing demand for biofuels as an alternative energy resource.

The faith-based coalition said, “Rather than searching to replenish diminishing fossil-fuel energy supplies at all costs, efforts need to go into restructuring our society to use less energy and resources.”

Jacques Diouf, director-general of the U.N. Food and Agriculture Organization, told the Vatican newspaper, L’Osservatore Romano, that national economies spend too much on warfare and not enough on agricultural production.

The developing countries in Africa that have made the least progress in reversing food insecurity are the same ones involved heavily in a war or internal conflict, he said in the paper’s June 3 edition.

“To tell the truth, if developing countries had spent on agriculture what they have spent for arms, the problems with food would not exist,” he said.