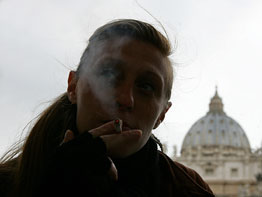 VATICAN CITY – Papal visits tend to bring out special interest groups, and one already has surfaced in the United States.

Physicians and Nurses Against Tobacco, a Rhode Island-based organization, is asking Pope Benedict XVI to support its campaign for a tobacco-free society.

The group’s petition, posted online, appeals to the pope not only to denounce the sale and use of tobacco during his April 15-20 visit to the United States, but also to declare Vatican City the world’s first tobacco-free state.

“We hope to convince him to make this gesture as an example to other religious and political leaders and policymakers,” the petition says.

Some might dismiss the initiative as a publicity grab, but there is no denying that tobacco is a serious health issue.

The World Health Organization says tobacco kills 5.4 million people a year, and with smoking rates on the rise in developing countries, the death toll could rise to 8.3 million over the next 20 years.

The Vatican used to be known as a safe haven for cigarette smokers. That changed dramatically in 2002, when Vatican City prohibited smoking in offices and public places.

But employees and visitors continue to puff away in outdoor areas of the 109-acre state, and turning the Vatican into a totally smoke-free zone would probably not go down well.

On a recent morning, one employee sat outside the Vatican’s health care center, taking a cigarette break. The butts on the nearby cobblestones indicated this as a smokers’ meeting ground.

A Vatican police officer said it’s possible for workers to be suspended from their jobs if they persist in smoking in office areas. But like others, he said banning smoking outside would seem too draconian.

“We’re not in Singapore,” he remarked, an allusion to Singapore’s strict laws on things like gum-chewing and littering.

In St. Peter’s Square one can light up with no problem. No one tries to enter St. Peter’s Basilica with a lit cigarette, but smokers – including ushers on break – can be seen on the basilica’s steps.

One Brazilian tourist visiting Rome in March leaned against the facade of the basilica and finished a cigarette as his wife and daughter toured the inside.

Bishop Renato Boccardo, secretary general of the Vatican City governor’s office, is proud of the fact that smoking has been drastically curtailed.

“It’s changed a lot. For a while, even after the no-smoking rule, people still smoked. But now it’s entered into the general mentality,” he said.

Bishop Boccardo made waves a few years ago when, as a papal trip planner, he shut down smoking on the plane that took the pope on his foreign visits.

For years after Alitalia instituted a ban on in-flight smoking, members of the papal entourage and journalists continued to light up on the pope’s chartered plane. They were encouraged by the fact that Alitalia gave every passenger a free carton of cigarettes.

“I just didn’t understand why, especially with the pope aboard, we were making an exception to this law. So we said, ‘Enough. No more smoking on this plane,’“ Bishop Boccardo said.

Some have pointed out that, even though the Holy See has expressed support for a World Health Organization convention on tobacco control, the Vatican continues to sell tobacco products to its employees at a discount.

“We’ve noted to the proper Vatican officials that this seems to be a contradiction,” said Bishop Jose Redrado Marchite, secretary of the Pontifical Council for Health Care Workers.

Certain steps are being taken in that regard. For one thing, the price difference between cigarettes sold at the Vatican and in Italy has been reduced, and so there’s less demand.

Bishop Boccardo said the Vatican is moving gradually to phase out tobacco sales.

“We can’t do this overnight, but the project is to keep reducing the sale of tobacco products, precisely to show the sensitivity of the Holy See toward this question,” the bishop said.

On a moral level, the church has never defined smoking as a sin. The Catechism of the Catholic Church says the gift of physical health requires “reasonable care” of the body, and more specifically says: “The virtue of temperance disposes us to avoid every kind of excess: the abuse of food, alcohol, tobacco or medicine.”

Anti-smoking activists would say any use of tobacco is an abuse, considering its demonstrated harmful effects. But the church has not pronounced on that question.

“It’s harmful, yes. But so is eating too much meat, which raises cholesterol levels. It’s hard to say exactly when something like this becomes a sin,” said Bishop Redrado.

It’s a problem previous generations of church leaders didn’t worry about much. The 19th-century Pope Pius IX, for example, built a tobacco factory for cigar rolling in Rome’s Trastevere neighborhood. The Latin inscription boasts that the pope thus provided the city with “a factory for processing nicotine leaves.”