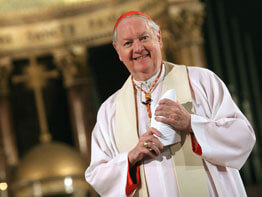 NEW YORK – Although security will be tight and tickets limited by the size of the venues that will host Pope Benedict XVI, careful arrangements have been made to allow him to interact with as many New Yorkers as possible during the visit, said Cardinal Edward M. Egan of New York.

The cardinal made the comments in a recent hourlong interview with Catholic New York, the archdiocesan newspaper, at his residence.

One of those “close-up” opportunities with him will be at St. Patrick’s Cathedral, where people will be on the steps awaiting his arrival April 19.

Cardinal Egan, New York Mayor Michael R. Bloomberg and cathedral rector Monsignor Robert T. Ritchie will greet the pontiff’s car and walk with him up the steps to the main bronze doors, where he likely will turn to wave and offer a blessing to the crowds gathered on nearby streets before entering the cathedral.

Inside, the pope will walk up the center aisle to the sanctuary; he will walk along the side aisles for the processional and recessional of the Mass. The congregation will be made up of about 2,800 priests, deacons, religious from New York and around the country. Most of those in attendance will be from the New York Archdiocese, the cardinal said.

That afternoon the pope will greet about 50 people young people with disabilities and their caregivers in the Chapel of SS. Peter and Paul at St. Joseph’s Seminary in the Dunwoodie section of Yonkers.

As he approaches the chapel, seminarians will be lined up at either side of the entrance as he walks in.

Then he will board his popemobile to make his way around the seminary building to the grounds at the rear where he will be greeted by a cheering crowd of more than 26,000 young people.

Besides the teenagers and young adults in archdiocesan schools and religious education, campus ministry and youth programs, the crowd will include seminarians from St. Joseph’s and others considering the priesthood. Invitations also went out to seminarians studying in priesthood preparation programs around the country and to women and men in formation for religious congregations.

After welcoming the pope, a group of young people will present him with gifts that include an “I Love New York” T-shirt, said Catherine T. Hickey, archdiocesan education secretary. “Then we will sing ‘Happy Birthday’ to him in German,” she added.

The pope, who turns 81 April 16, will then address the youths.

At ground zero the next morning, the pope will be driven part of the way down to the site on a specially built ramp and then will walk the rest of the way to stand where almost 3,000 people perished in the Sept. 11, 2001, terrorist attacks on the World Trade Center.

He will pray beside a shallow pool and candle in memory of the victims. Then he will greet 24 people representing three groups affected by the tragedy: the first responders – New York and Port Authority police officers, firefighters, emergency service workers and health care professionals; family members and loved ones of people who lost their lives; and people who were injured.

The pope also will greet officials of the states of New York and New Jersey and the city of New York at ground zero.

The pope’s final U.S. event will be an afternoon Mass April 20 at Yankee Stadium. More than 58,000 people are expected to attend.

The Mass will mark the bicentennials of the archdioceses of New York, Boston, Philadelphia and Louisville, Ky., which was founded as Bardstown, Ky. They were erected in 1808 from the nation’s first diocese, Baltimore, which was established as an archdiocese the same year.

The coats of arms of the five archdioceses will be displayed in right, left and center fields at the stadium.