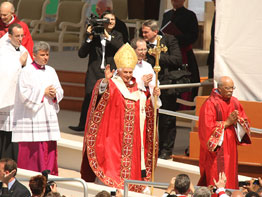 WASHINGTON, D.C. – The instant the slow-rolling white popemobile made its entrance into Nationals Park April 17, a wave of applause rippled through the packed stadium – easily rivaling any ovation a hometown slugger might receive.

More than 45,000 Catholic faithful from all backgrounds had waited hours to welcome Pope Benedict XVI to Washington for his first public Mass as pope in the United States. This was their chance to shower the smiling Bavarian pontiff with love, and they weren’t the least bit bashful.

Enthusiastically waving miniature yellow-and-white papal flags, the faithful stood on their feet, clapped their hands and cheered as the familiar white-clad visitor circled the track to shouts of “viva il papa!”

Camera flashes sparkled like rolling glitter throughout the brand-new stadium as thousands snapped photos and videotaped Pope Benedict while he offered a one-armed blessing through an open window.

The stately sounds of a regal brass ensemble competed with the cheering masses before a choir led the outdoor congregation in “Holy God, We Praise Thy Name” – including a verse in German.

After he completed the lap around the stadium, the pope disappeared from sight for a moment before emerging from a dugout in a crimson chasuble and golden miter to process to a specially made altar.

More than 2,500 Catholics from the Archdiocese of Baltimore attended the joyful morning Mass, many of them getting up at 2 a.m. to drive, board buses or take the metro to the 10 a.m. celebration. Whether seated in the “nose-bleed sections” far above the field or on folding chairs closer to the pope, Massgoers embraced the liturgy as a special way to celebrate church unity and solidarity with the Holy Father. The theme of the Mass focused on “Christ Our Hope.”

“This is a once-in-a lifetime opportunity,” said Sherry Frick, a parishioner of St. Piux X in Rodgers Forge, who attended with her husband, Kevin, and two of their children, Joshua, 8, and Christopher, 11.

“We wanted to give our children an appreciation for the pope,” she said. “Sometimes the pope seems far away. This helps them know he’s real.”

“I hope it helps more people think about coming to church more often,” said Mr. Frick, a parish musician who eagerly sat in his seat more than two hours before the liturgy began.

“This is pretty amazing,” he said.

Sister Beatrice Scully, a Little Sister of the Poor from Washington who attended the liturgy with fellow sisters from Baltimore and Cincinnati, could barely contain her enthusiasm about being in the presence of the pope.

“It’s absolutely awesome, and it’s sacred and holy for us,” she beamed, while a Baltimore sister unfurled a yellow bandana with a message of hope before the Mass.

“It’s the vicar of Christ on earth – it’s Christ walking among us,” she said. “He’s our father. He’s our guide. He’s the leader of truth.”

Many in the stadium used their Mass programs to shield their eyes from a bright sun that beat down from a cloudless, blue sky. The warm temperature – surpassing 75 degrees – didn’t keep them from participating fully in a liturgy that reflected America’s growing cultural diversity.

The Mass featured singing in Latin, German, Spanish and more – with liturgical music encompassing a range of styles, including African-American Gospel, traditional chant, contemporary and Latin-inspired rhythms. A majestic organ, melodic handbells and an otherworldly pan flute were just a few of the musical instruments that accompanied the singing.

Prayers of the faithful were offered in six languages – English, Spanish, Korean, Vietnamese, Tagalog and Igbo.

Father Brian Nolan, associate pastor of St. Jane Frances de Chantal in Pasadena, was among the more than 1,300 clergy who processed into the stadium to concelebrate the two-hour Mass.

“It’s like one big Catholic reunion,” said Father Nolan. “You see people you know from all over the country. It’s so good to be with the Holy Father.”

Members of the media from across the country and around the world converged on the capital to cover the spiritual celebration. Jamie Costello, an anchor with Channel 2 in Baltimore, was among them. He called it a personal thrill as a Catholic to cover the pope. The parishioner of St. Isaac Jogues in Carney had previously reported on Pope John Paul II’s visit to Baltimore in 1995.

“I’m trying to see the crowd reaction to this pope,” said Mr. Costello, standing behind a bank of television cameras trained on a slew of reporters from several U.S. cities before Mass.

“I think the charismatic and the educator here will come together,” he said. “I sense the same energy (as Pope John Paul’s visit), and we’re several hours away.”

“Catholics need to learn more about their faith,” said Mr. Issa, a Maronite Catholic. “This pope wants us to be unified in our Catholic faith. It’s a good message.”

With thousands of people milling in and around the stadium, there were plenty of lines at the papal Mass. But few seemed to mind.

Hundreds of Catholics went to face-to-face confession in a “confession plaza” set up in the concourse. Others waited patiently to have their photos taken with life-sized cutout figures of Pope Benedict.

Adrian Simmons, a 29-year-old parishioner of St. Mary of the Mills in Laurel, served as an usher – helping people find their way to their seats and to Communion stations that were marked with bright yellow umbrellas. He was amazed by the orderliness of so many people.

“Even coming in on the metro, we were all jammed in,” he said. “But everyone took it in stride. It was really great.”

While large American flags covered billboards above a massive papal altar, a touch of commercialism was still evident with vendors peddling all sorts of goods along the concourse. Jessica Herron, who helped run one of the vending stands, reported that the top sellers were $20 Pope Benedict shirts, $10 papal coffee mugs and $10 prayer cards.

But it was the pope’s message of hope that brought some to tears. In his homily, the pope praised American optimism and urged believers to stay strong in the faith. By the end of the day, there was a general consensus: Pope Benedict knocked it out of the park.