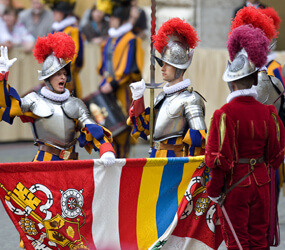 VATICAN CITY – Pope Benedict XVI underlined the Swiss Guard’s important task of protecting the pope and watching over the Vatican.

The Guard must keep watch over the Apostolic Palace and be vigilant and kind to all those who enter, the pope said.

But, most importantly, the Guard must “faithfully, loyally and honorably serve the supreme pontiff and sacrifice, if necessary, their life for him,” he said.

The pope’s comments came May 7 during a special audience with Swiss Guards and 32 new recruits.

New soldiers are sworn in during a colorful ceremony at the Vatican every May 6 to commemorate the day 150 Swiss Guards died saving Pope Clement VII’s life during the sack of Rome on that date in 1527.

Today, the Swiss Guard numbers 110 men, but that may someday change.
The Swiss Guard’s new commander has reiterated that he is open to the possibility of allowing female recruits.

Col. Daniel Anrig, who was named by the pope in December to head the Guard, told Italian television May 5 that letting women join the elite papal guard “may be possible.”

The commander had made a similar statement five months ago, soon after his appointment. At that time, he said that although he was unfamiliar with the finer details of the Swiss Guard regulations he believed that, “as commandant, one has to be always open to new questions including those relating to recruitment.”

In a phone interview May 5 with Italian television, Anrig said if the corps were to include women it would happen in the distant future.

The main problem, he said, is logistical: Where would the female guards be housed when there is only one barracks?

Having young men and women share the same living quarters “could create problems, but every problem can be solved,” he said.

Anrig is the first commander to have expressed openness to the idea of female recruits. His predecessor, Col. Elmar Mader, had vigorously opposed the idea.

When asked by reporters in 2004 about the likelihood of women joining the Swiss Guard, he said, “Not under my command.”

“It’s a very ecclesial environment” and “60 percent of our corps is under the age of 25; women in the same barracks (as the men) would create big problems,” Mader had explained.