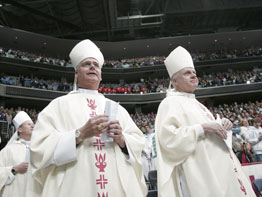 WASHINGTON – Although he was not physically present, Pope Benedict XVI’s greeting added to the excitement of the more than 20,000 young people at a youth rally and Mass for life Jan. 22 at the Verizon Center.

Young people came from across the United States and from throughout the Washington area.

The rally and Mass, sponsored by the Archdiocese of Washington, precedes the annual March for Life, which marks the date of the Supreme Court’s 1973 Roe v. Wade decision legalizing abortion.

When Washington Archbishop Donald W. Wuerl, the main celebrant for the Mass, introduced the apostolic nuncio to the United States, Archbishop Pietro Sambi, the crowd responded with a long standing ovation that cascaded through the arena as the pope’s representative smiled and waved.

Nine months earlier, Pope Benedict had celebrated his first Mass as pope in the United States, just across town at Nationals Park.

Archbishop Sambi read the message from the pope to the Verizon crowd. The pontiff said he was “deeply grateful to all who take part in this outstanding annual witness to the Gospel of life, and to the many others who support them by fasting and prayer.”

Pope Benedict noted that during his April 2008 visit to the United States he urged young people “to promote a culture of life by defending the unchanging moral truths which safeguard the dignity and rights of every man, woman and child in our world – including the most defenseless of our brothers and sisters, the unborn child in the mother’s womb.”

His Jan. 22 message noted that “no Christian can shirk the moral duty of affirming the sacredness of God’s gift of life at every stage of its development and working to ensure that this fundamental human right receives due legal protection.”

Archbishop Wuerl, holding his shepherd’s staff, smiled as he processed to the altar and looked up at the capacity crowd filling the arena where the Washington Capitals hockey team and Washington Wizards basketball team play their home games.

“Together, we bear witness to the Gospel of life … as we renew our commitment to proclaim the value and the dignity of all human life,” Archbishop Wuerl said in greeting the crowd.

He mentioned by name the nearly 50 archbishops and bishops attending the Mass, and as he did, the corresponding sections of the congregation cheered their bishops from the sections where they were sitting.

About 350 priests also concelebrated the Mass, joined by about 60 deacons, and hundreds of seminarians and women religious sitting in the arena.

The two-hour rally before the Mass included Catholic rock music performed by singer Steve Angrisano from Colorado; the Who Do You Say I Am band from Cleveland; Puerto Rican singer Jessica Marie Tous; and Matt Maher and his band.

Youths offered testimony during the rally and later led the crowd in praying the luminous mysteries added to the rosary by Pope John Paul II in 2002.

Delivering the homily for the Mass was Father Robert Walsh, assistant vocations director for the Washington Archdiocese. He told the young people: “You’ve received Jesus. Don’t keep him to yourself. Bring him to others you meet. Ideas will not change laws as much as the love of Christ will.”

“In the last few days, we’ve seen amazing things in Washington, D.C. This is a historic time,” he said. “Today the White House is not the most powerful building in Washington, D.C. It is right here. … It’s not because of us, it’s because of him. … Jesus says to us today, ‘I am the way, the truth and the life.’ Show that to others, so they too may find their way.”

After Communion, Archbishop Wuerl asked the priests, seminarians and women religious to stand, one group after the other, and the crowd greeted each one with a standing ovation. He also asked young people who are considering a vocation to stand up.

“God continues to call young men to the priesthood, and young women to religious life,” Archbishop Wuerl said, asking the youths and young adults in the crowd to prayerfully consider God’s call for them.

As crowds left the arena to join the March for Life, a local pastor who had accompanied his parishioners on a bus to the rally from suburban Maryland, said the witness of the young people at the rally inspired him.