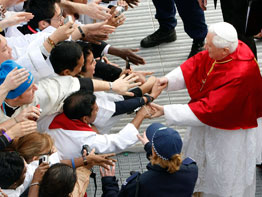 SYDNEY, Australia – With prayer and openness, young people can receive the power of the Holy Spirit and transform the world, Pope Benedict XVI told participants at World Youth Day.

“Do not be afraid to say ‘yes’ to Jesus, to find your joy in doing his will, giving yourself completely to the pursuit of holiness,” the pope told them July 20 as he celebrated the Mass closing the six-day youth gathering.

Some 350,000 people attended the morning Mass at Royal Randwick Racecourse and, police said, more than half of them had braved the cold and spent the night camping out at the track. World Youth Day officials put Mass attendance at 400,000.

Annalee Moyer, one of two U.S. members of the World Youth Day International Liturgy Group, was among the campers.

As she prepared to read the English-language prayer of the faithful during the July 20 Mass, she said, “I think I got three or four hours” of sleep. “It was really cold; I kept waking up.”

The overnight scene at Randwick, where temperatures dipped to 47 degrees Fahrenheit, was amazing, she said.

“When the bands were playing people were really hyped up and dancing,” she said. “But during the rosary, they were very quiet and reverent.”

Fulfilling another World Youth Day tradition, Pope Benedict announced at the end of the July 20 Mass that the next World Youth Day would be held in Madrid, Spain, in 2011.

At the July 19 vigil, the pope said that understanding the Holy Spirit, “the neglected person of the Blessed Trinity,” is not easy.

But, he said, the Spirit’s power to strengthen and to unify people in love is as real as the Spirit’s bond of unity and love with the Father and the Son.

And when Christians are filled with the Holy Spirit they can bring “the hope of peace, healing and harmony” to situations of conflict, suffering and tension, he said.

“Unity and reconciliation cannot be achieved through our efforts alone. God has made us for one another, and only in God and his church can we find the unity we seek,” the pope said.

Pope Benedict told the young people at the vigil that he knows many of them have been or will be tempted to drift away from their faith, but being true to oneself means being true to the God who created each person.

“God is with us in the reality of life, not the fantasy,” he said. “It is embrace, not escape that we seek.”

At the vigil, which began with the pope lighting a torch carried by a young indigenous woman and ended with eucharistic adoration, the pope told the young people to open themselves to the energy of God’s love.

“In accepting the power of the Holy Spirit you, too, can transform your families, communities and nations,” he said.

During the vigil, 24 young people from nine countries were introduced to the crowd; they were the 24 people who received the sacrament of confirmation from the pope during the July 20 Mass.

Juan Martinez, 18, of Matehuala, Mexico, was chosen to represent North America. He chose Pedro as his confirmation name.

At the Mass, the pope prayed that the World Youth Day experience would be a new Pentecost for all the participants, marking a new outpouring of the gifts of the Holy Spirit.

The celebration of World Youth Day, he said, has enabled everyone to experience the church as “a living community of love, embracing people of every race, nation and tongue.”

The Book of the Gospels was carried to the altar by a grass-skirt wearing dance troupe from Fiji.

Pope Benedict told the young people at the Mass that the Holy Spirit, the spirit of God’s love, “can only unleash its power when it is allowed to change us from within.”

The world needs the transforming power of the Holy Spirit, the pope said.

“In so many of our societies, side by side with material prosperity, a spiritual desert is spreading: an interior emptiness, an unnamed fear, a quiet sense of despair,” the pope said.

But the Gospel message of salvation reveals how each person was created in God’s image and made for love, he said, a love which “is not greedy or self-seeking, but pure, faithful and genuinely free, open to others, respectful of their dignity, seeking their good, radiating joy and beauty.”

Reciting the Angelus at the end of Mass, Pope Benedict urged the young people to look at how Mary was filled with the Spirit, how she willingly cooperated with the Spirit’s action in her life.

Her “yes” to God was like a marriage, the pope said; it marked a definitive moment of self-giving.

“In fairy tales, the story ends there and all ‘live happily ever after,’” he said. “In real life, it is not so simple.”

For Mary and for most people, living out a “yes” to God or to another person requires a constant commitment, a willingness to stay faithful despite struggles, pain and fear, he said.