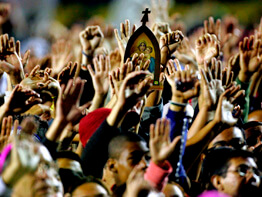 At a rally May 10 in Sao Paulo, the pope warned against sexual infidelity, drug use and unethical shortcuts to success and said the desire to build a more just society depends on following God’s law.

“Stretching out in front of you, my dear friends, is a life that all of us hope will be long; yet it is only one life, it is unique; do not let it pass in vain; do not squander it,” the pope said.

“Live it with enthusiasm and with joy, but most of all with a sense of responsibility,” he said.

About 40,000 young people crowded into the Paulo Machado de Carvalho soccer stadium for the papal encounter, and others spilled out into the Pacaembu neighborhood of Sao Paulo. Many arrived hours before the event.
A large group of young people from Rio de Janeiro sang and played tambourines as they walked toward the stadium, stopping to wave at busloads of passing bishops.

“What Catholic youth lack today is fervor,” said Juliana Moura, 21, of Rio de Janeiro. “There’s got to be more enthusiasm.”

There was plenty of energy inside the stadium, where the pope, smiling and waving, rode in a popemobile through the cheering throng.

He sat on a white platform built in the shape of a dove and listened as a young Catholic, Rodrigo Mendes, told him about youths who had traveled days to be there with him, to share their “joys, sorrows, accomplishments and challenges.”

Brazilian young people know that following Jesus is the only real way to bring revolution to society and overcome violence, Mendes said. Then he went up to the pope, kissed his ring and gave him a hug.

The program included a song calling for protection of the environment and an end to burning and killing in the Amazon region. As the music rang out, video projections of threatened Amazon species were shown on a giant screen.

Young men and women from various areas of the country performed rhythmic dances that reflected their local cultures.

The highlight of the evening was the pope’s talk. In a country where Christian televangelists have attracted millions with emotional and simplistic preaching, the pope offered a stark contrast: He sat on a chair and read a 4,000-word speech – mostly in Portuguese – that presented a carefully delineated argument for Christian virtue.

The pope’s talk was structured around the Gospel story of the rich young man who seeks out Jesus for advice about salvation but cannot bring himself to commit fully to Jesus’ message.

The pope said the young man had asked a crucial question that is just as relevant today: What must I do to gain eternal life? The answer, the pope said, begins with the recognition that life transcends the “here and now” and that God and his creation are good.

When people see the beauty of creation, he said, “it is impossible not to believe in God.” He said Brazilians’ desire to protect the country’s natural environment, especially the vast forests of the Amazon region, reflects this awareness of the creator.

“The devastation of the environment in the Amazon basin and the threats against the human dignity of peoples living within that region call for greater commitment,” he said.

God’s commandments are important, the pope said, and it is even more important to witness them in daily life.

He said that is not always easy in a modern society characterized by “assaults of materialism and secularism,” the lures of corruption and the tendency to impose one’s own economic or political aspirations on others.
He called on young people to avoid these “snares of evil,” particularly when they involve marriage and the family. True domestic happiness depends upon fidelity between spouses, and couples inside and outside marriage should practice sexual responsibility, he said.

The pope also urged young people to be guided by the values of their faith in building a more just and peaceful society.

To do that, he said, they need to overcome common fears: fear of death, fear of failure to find life’s deeper meaning, and fear of being left aside by the disconcerting acceleration of events and communications.
“We see the high death rate among young people, the threat of violence, the deplorable proliferation of drugs which strike at the deepest roots of youth today. For these reasons, we hear talk of a ‘lost youth,’” he said.
Looking out at the crowd, the pope said he was certain they would find a way to be apostles for their faith.

“My appeal to you today, young people present at this gathering, is this: Do not waste your youth. Do not seek to escape from it. Live it intensely.
Consecrate it to the high ideals of faith and human solidarity,” he said.
The pope’s speech was interrupted several times by applause, and when he mentioned his predecessor, Pope John Paul II, a loud cheer went up along with cries of “Santo!” (Saint!). Pope John Paul visited Brazil three times.