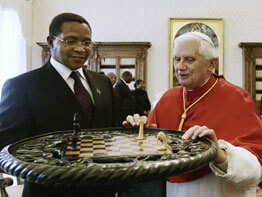 A Vatican statement said the talks touched on Tanzania’s role in working out peace agreements among the Great Lakes countries of central Africa. Kikwete recently hosted a one-day summit to ease tensions along the Uganda-Congo border, where the discovery of oil has generated a dispute.

The Vatican said the talks also focused on “the importance of peaceful coexistence and collaboration between believers of all religions, in particular between Christians and Muslims.”

Kikwete, a Muslim, has promoted interfaith cooperation in Tanzania, where the population is about one-third Muslim, one-third Christian and one-third followers of indigenous beliefs.

The Vatican pledged the church’s continuing support in areas of health care, education and social assistance, underlining that such church-run programs benefit all Tanzanians.

The Tanzanian president gave the pontiff an unusual gift at the end of the audience – an ebony table with an inlaid chessboard, decorated with carved giraffes and other animals of Africa.