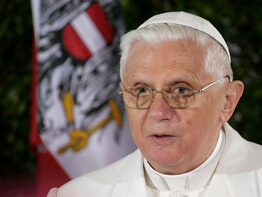 VIENNA, Austria – Before an audience of Austrian political leaders and international diplomats, Pope Benedict XVI urged Europe to not to jettison its Christian values – especially when it comes to the rights of the unborn and the dying.
The pope made the remarks Sept. 7 in an ornate reception hall of Vienna’s Hofburg Palace, which was packed with government officials, legislators, ambassadors and representatives to U.N. and other agencies.
After being welcomed warmly by Austrian President Heinz Fischer, the pope stood on a red-carpeted podium and declared bluntly: “Europe cannot and must not deny her Christian roots. These represent a dynamic component of our civilization as we move forward into the third millennium.”
The pope then quickly turned to two pro-life issues – abortion and euthanasia – which he said were not merely church concerns but represented threats to the most basic human right, that of life itself.
Abortion, he said, “cannot be a human right – it is the very opposite.” In stating this, he said he was “speaking out on behalf of those unborn children who have no voice.”
The pope appealed to political leaders “not to allow children to be considered as a form of illness.” At the same time, he acknowledged that the issue of abortion is sometimes complex.
“I do not close my eyes to the difficulties and conflicts which many women are experiencing, and I realize that the credibility of what we say also depends on what the church herself is doing to help women in trouble,” he said.
In Austria, abortion is available upon request during the first three months of pregnancy, and later in pregnancy under more restricted circumstances. The Catholic Church in Austria runs a network of homes for unwed mothers, as well as for the dying.
The pope said abortion was only one side of a larger problem for Europe, where young couples should be encouraged to welcome children and build families. Political and religious leaders need to help create once again “a climate of joy and confidence in life, a climate in which children are not seen as a burden but rather as a gift for all,” he said.
Referring to Europe’s low birth rate, the pope noted that the continent is demographically aging. But Europe must not become old in spirit, he said.
“It must not give up on itself,” he said.
In his remarks on euthanasia, the pope said he was deeply worried about the current debate on what is termed “actively assisted death.” The fear, he said, is that the gravely ill or elderly will be pressured to request death or even administer it themselves.
The proper response to terminal illness is loving care and accompaniment, especially palliative care, the pope said. The hospice movement “has done wonders” in this regard, he said.
But he said Europe needs urgent structural reforms of health care systems in order to provide “humane accompaniment on the journey toward death,” including psychological and pastoral attention.
The pope, who had been suffering from hoarseness before arriving in Austria, delivered his speech in a strong voice, pausing occasionally to take a drink of water. He was winding up the first day of a three-day pilgrimage to the country.
He praised the movement toward European unity, but said Europe also has to look beyond its continental boundaries. In particular, he said, Europe should take a leadership role in fighting global poverty, promoting peace in the Middle East, and helping to “regulate and limit” globalization so that it will not damage the world’s poor and the economic prospects of future generations.
He said Europe has experienced a wide range of mistakes over the centuries, including the “abuse of religion and reason for imperialistic purposes,” the degradation caused by theoretical and practical materialism, and “the degeneration of tolerance into an indifference with no reference to permanent values.”
But Europe has also been marked by a capacity for self-criticism, he said, and by a tradition of thought that sees a correspondence between faith, truth and reason. At the root of this outlook is the Christian conviction that “at the origin of everything is the creative reason of God,” he said.
He closed by telling Austrian officials, “An Austria without a vibrant Christian faith would no longer be Austria.”
The pope’s speech was uninterrupted by applause, but at the end he received a standing ovation from those in the chandeliered hall.
Earlier, the pope held closed-door talks with Fischer in the presidential palace.