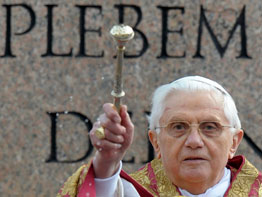 VATICAN CITY – Pope Benedict XVI stepped up appeals for an end to the bloodbath and hatred tearing apart Iraq.

Mentioning the recent tragic death of an Iraqi archbishop and the upcoming fifth anniversary of the start of the U.S.-led campaign against Iraq, the pope issued “a loud and concerned outcry.”

He launched an appeal to all Iraqis, “who for the past five years have borne the consequences of a war that has caused the upheaval of civil and social life.”

“Beloved Iraqi people: Lift up your heads and let it be you yourselves who, in the first place, rebuild” the life of the nation, he said.

“May reconciliation, forgiveness, justice and respect for the civil coexistence among tribes, ethnicities and religious groups” be the harmonious path the people take so as to achieve peace in God’s name, the pope said.

In his address, the pope recalled the “tragic loss” of Chaldean Catholic Archbishop Paulos Faraj Rahho of Mosul, 65, who was kidnapped Feb. 29 in an attack that left his driver and two bodyguards dead.

The archbishop had paid “beautiful witness of faithfulness to Christ, the church and his people, whom he did not want to abandon despite numerous threats,” the pope said.

The archbishop’s body was recovered March 13 after the kidnappers told Catholic leaders in Iraq where he had been buried.

Police were unclear whether Archbishop Rahho had been killed. He suffered from a heart condition and needed medication, church officials said.

An autopsy was inconclusive about the cause of death due to the advanced state of the body’s decomposition. The archbishop had no bullet wounds, and he appeared to have been dead a week, reported the British news agency Reuters.

Pope Benedict celebrated a memorial Mass March 17 for Archbishop Rahho in the Redemptoris Mater Chapel of the Vatican’s Apostolic Palace.

He praised the archbishop for being “a man of peace and dialogue” who dedicated himself to helping the poor and handicapped.

He asked that Archbishop Rahho’s example inspire “all Iraqis of good will, Christians and Muslims, to build a peaceful coexistence founded on brotherhood and mutual respect.”

He also encouraged the nation’s Christians to persevere and know that they can find the strength in their faith in God and Christ “to not lose heart in the difficult situation they are living through.”

The pope denounced the “inhumane way” the archbishop died as well as his “indecent burial” by his kidnappers.

The archbishop had followed in Christ’s footsteps, carrying a heavy cross, remaining faithful “to the law of love” and paying witness to the truth not only for his “martyred country” but also for the whole world, said the pope.

Again he urged the country’s Christians to continue dedicating themselves to building a peaceful, harmonious society.

Archbishop Rahho’s funeral and burial were March 14 outside Mosul, a northern Iraqi city considered to be a stronghold of al-Qaida. Iraqi Prime Minister Nouri al-Maliki blamed al-Qaida for the archbishop’s death.

Thousands of people turned out for the archbishop’s funeral, at which the Chaldean patriarch, Cardinal Emmanuel-Karim Delly of Baghdad, presided.

“There is no doubt that (Archbishop) Rahho is a martyr,” the apostolic nuncio to Iraq, Archbishop Francis Chullikatt, told the Vatican newspaper L’Osservatore Romano.

“And I hope this sacrifice can serve to draw the whole world’s attention to the Iraqi crisis,” he said in the paper’s March 16 edition.

The upcoming fifth anniversary of the March 20 start of the war in Iraq – it was March 19 in the United States – should spur the international community to better reflect on the ongoing violence there, the archbishop said.

He told the Vatican paper that people must not let their guard down, “otherwise the situation will become more difficult to handle, above all for us Christians who are a minority.”

While thousands of Christians have been fleeing the country, Archbishop Chullikatt said Archbishop Rahho’s death should not discourage Christians. Something must be done to convince Christians to stay in Iraq, and “with faith and God’s love everything can return (to being) the way it was before,” he said.

In his March 14 homily, Cardinal Delly said the archbishop’s death must not be a catalyst for further division within the country.

Iraqis must stay united, he said in his homily, and Christians must continue to promote peace, pray for those responsible for the archbishop’s death and not look upon the kidnappers as the enemy.