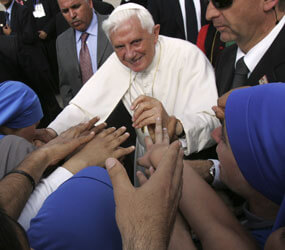 AMMAN, Jordan – Pope Benedict XVI’s first stop in Jordan was at a church-run facility for people with disabilities, a place he said demonstrates how suffering can change people for the better.

“Standing in your midst, I draw strength from God,” the pope told the clients of Amman’s Regina Pacis center, established in 2004 by the Latin Patriarchate of Jerusalem.

Arriving directly from the Amman airport May 8, the pope said that “in our own trials, and standing alongside others in their struggles, we glimpse the essence of our humanity; we become, as it were, more human.”

“And we come to learn that, on another plane, even hearts hardened by cynicism or injustice or unwillingness to forgive are never beyond the reach of God,” because every heart “can always be opened to a new way of being, a vision of peace.”

The center is operated by three Comboni Missionary Sisters and a team of teachers, therapists and volunteers to educate and care for Muslims and Christians with disabilities.

With a particular mission to the poor, it provides vocational training, therapy and basic medical care free of charge. Satellite centers operate in six other Jordanian cities.

The pope told the clients and workers, “At times it is difficult to find a reason for what appears only as an obstacle to be overcome or even as a pain – physical or emotional – to be endured.

“Yet faith and understanding help us to see a horizon beyond our own selves in order to imagine life as God does. God’s unconditional love, which gives life to every human individual, points to a meaning and purpose for all human life,” the pope said.

In addition to working directly with people with disabilities and their families, the Regina Pacis center supports several interfaith committees working throughout the country to promote and defend the rights of the disabled.

In a country that is about 92 percent Muslim and 3 percent to 6 percent Christian, the committees try to raise people’s awareness that every person, no matter his or her physical or mental condition, was created by the one God. It is estimated that 10 percent of Jordanian young people under age 19 suffer from a serious disability.

Latin Patriarch Fouad Twal of Jerusalem told the pope, “The shared work of love among our volunteers, founded on religious principles – both Christian and Muslim – roots them in a profound appreciation for our shared humanity.

“It also gives a practical experience of constructive dialogue based on working side by side with openness toward the other without reserve or prejudice,” the patriarch said.

Before entering the Church of the Good Shepherd in front of the center, the pope waded into a huge crowd of well-wishers entertained by a band playing the “gerpe” – a Jordanian bagpipe – and tabla, or hand drums.

Before the pope’s arrival at the church, Auxiliary Bishop Salim Sayegh of Jerusalem, patriarchal vicar for Latin-rite Catholics in Jordan, held a huge Jordanian flag. In addition to the hundreds of Vatican and Jordanian flags being waved, members of the crowd from other countries held their own country’s flags aloft, representing Egypt, Argentina, the Palestinian territories, Yemen, Iraq and Syria.

Visitors from Lebanon held their flag and a banner that said, “We need you in Lebanon.”

Italian Comboni Sister Adriana Biolla, who serves at the Regina Pacis center, said she and the children at the center had been awaiting the visit for months.

“We’ve been asking the children – almost all are Muslim – to pray for the pope’s visit. That’s the only thing we can ask of them, because they are disabled,” she said, adding that she, too, hoped the pope would push for peace in the region.

Inside the church, as the pope spoke, Sister Adriana stood beside Ida Shishani, a 50-year-old paraplegic who volunteers at the center.

“I’m very glad to be here and to see ‘Baba’ (the pope),” Shishani, a Muslim, told Catholic News Service. “He is our king’s guest and also all of Jordan’s guest. He’s trying for the peace like our king is. We have been waiting for this moment. His visit to Jordan is good for all of us, Muslim and Christian.”

Sister Adriana accompanied Shishani in the procession of gifts presented to the pope. When Shishani presented her bouquet of yellow and white flowers to the pope, the approximately 300 people packed in the church cheered. They also cheered when the Jordanian “shmagh,” a red and white scarf, was placed around the pope’s neck.