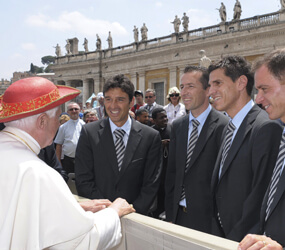 VATICAN CITY – The principles of poverty, chastity and sacrifice for the good of the community, which are characteristic of monastic life, are valid for all Christians, Pope Benedict XVI said.

During his weekly general audience May 27 in St. Peter’s Square, the pope used the example of the Byzantine monk St. Theodore the Studite to explain how the virtues that monks and nuns strive for should be emulated by all in everyday life.

St. Theodore, who was born in 759, emphasized the ideals of “renunciation of private property, freedom from material things, sobriety (and) simplicity,” the pope told the crowd of about 14,000 people. “This extreme form is valid for monks, but the spirit is valid for everyone,” he said.

St. Theodore, who was born to a noble family and entered the monastery at age 22, led the opposition to the Iconoclastic movement that called for the destruction of religious images deemed to promote idolatry.

In founding his own monastery later, he was instrumental in bringing back the ideals espoused by monks “who make a commitment to live the truth of the church with greater rigor and intensity in order to give a sign to all Christians,” the pope said.

“Only by learning to renounce material things, practicing austerity and simplicity can there be a more just society and can the great poverty in the world be overcome,” he said.

The “radical direction” of monks shows the way for others, he said.

The monastery itself and the sacrifice of the individual for the good of the community can be seen as a metaphor for what all Christians are called to do, he said, warning that the faithful should oppose “the primacy of individual will that destroys the fabric of society.”

The pope also praised St. Theodore’s promotion of “philergia,” or love of work, as “a way to find God.”

St. Theodore’s conviction that the monastery’s earnings should be shared with the poor was an example that “we can all learn that the fruits of our work should be for the benefit of all,” the pope said.

The former British prime minister, Lady Margaret Thatcher, attended the audience, and was greeted personally by the pope afterward.

Dressed in a black suit with a black lace headpiece, the 83-year-old former politician smiled, spoke to the pope and shook his hand. She was accompanied by Charles Powell, who had been a foreign policy adviser to her government and who also had a chance to speak with the pope.