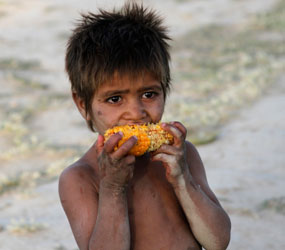 In responding to the crisis, international agencies should rediscover the value of the family farm, promoting the movement of young people back into rural areas, the pope said July 1 in an address to participants in an annual conference on hunger organized by the Rome-based U.N. Food and Agriculture Organization.

Meeting with the group at the Vatican, the pope strongly emphasized the theme of economic justice that has figured prominently in his encyclicals and other writings. He noted that millions of men, women and children remain without adequate nourishment today.

“My thoughts turn toward the situation of millions of children, who are the first victims of this tragedy, condemned to an early death or to a delay in their physical or psychic development, or forced into forms of exploitation just to receive minimal nutrition,” he said.

The pope said the cause of such hunger cannot be found only in technical developments such as production cycles or commodity prices.

“Poverty, underdevelopment and, therefore, hunger are often the result of selfish behaviors that, born in the human heart, manifest themselves in social life, economic exchange, in market conditions and in the lack of access to food,” the pope said.

“How can we be silent about the fact that even food has become the object of speculation or is tied to the course of a financial market that, lacking definite rules and poor in moral principles, appears anchored to the sole objective of profit?” he said.

The pope said the United Nations’ own studies show that global food production is able to feed the world’s population – which makes the situations of hunger all the more unjust.

The international community often limits its food assistance to emergency situations, he said. Instead, he told the experts, it needs to address the problem with long-term strategies that consider the human dimension of development and not just economic benefits.

The pope called for support of international efforts to promote the family farm as a key component of national economies. The traditional nuclear family, he said, has shown itself to be a competent instrument for agricultural production and for training of new generations in farming.

“The rural family is a model not only of work, but of life and the concrete expression of solidarity, in which the essential role of the woman is confirmed,” he said.

The pope said food security also requires protective measures against “frenetic exploitation of natural resources.” This is especially true because the race to consumption and waste seems to ignore the threat to the genetic patrimony and biological diversity, which are so important to agricultural activity, he said.

He said the Bible’s injunction to “cultivate and care for the earth” is opposed to exclusive appropriation of such natural resources.