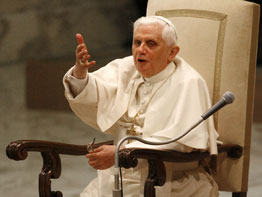 VATICAN CITY – Children have a right to “stability, serenity and security,” Pope Benedict XVI said, urging that more be done in providing these essential conditions to young people trapped in refugee camps.

In his message for the annual World Day for Migrants and Refugees, the pope highlighted young people whose futures are jeopardized by being forced migrants, victims of human trafficking or refugees.

The text for the pope’s 2008 message, “Young Migrants,” was released during a Nov. 28 press conference at the Vatican. The World Day for Migrants and Refugees is held on different days in different countries. In the United States, National Migration Week will be celebrated Jan. 6-12.

The world cannot “remain silent before the distressing images of the great refugee camps” where children and young people live segregated “far from inhabited towns with no possibility normally to attend school,” he said.

These children have come into the world “with the same legitimate expectations of happiness” as everyone else, he said, but instead they “have only had as their life experience the permanent, compulsory camps.”

“How can we not remember that childhood and adolescence are fundamentally important stages for the development of a man and a woman that require stability, serenity and security?” he asked.

Archbishop Agostino Marchetto, secretary of the Pontifical Council for Migrants and Travelers, said at the press conference that the international community should remember refugee camps are meant to be temporary shelters, not a long-term or permanent solution.

“By now a whole generation has been born and raised in refugee camps” and oftentimes in crowded and “frightening situations,” he said.

Cardinal Renato Martino, president of the council, said he hoped Middle East peace talks would address the right of return for Palestinian refugees, because “all refugees have the right to return to their homeland.”

In his message, Pope Benedict said that, while much is being done to alleviate the plight of refugees, there must be a greater commitment in helping refugees “by creating suitable hospitality and formative structures” that can help prepare them for an eventual return to school, work and society.

Young boys and girls who migrate and are unaccompanied by family members are in need of special attention, he said, because they are at risk of living on the street and falling into the hands of “unscrupulous exploiters” who often make them victims of physical, moral and sexual violence.

Pope Benedict called on Christians to welcome young migrants and their families and help them cope and adapt to their new surroundings.

He also urged young migrants to “be respectful of the laws and never let yourselves be carried away by hatred and violence.”

He asked them instead to tackle difficulties constructively by taking the initiative together with their peers to build “a more just and fraternal society.”

The text of the migration message in Spanish can be found online at:
http://www.vatican.va/holy_father/benedict_xvi/messages/migration/documents/hf_ben-xvi_mes_20071018_world-migrants-day_sp.html.