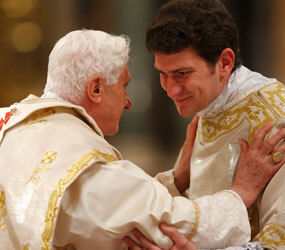 ROME – The primary purpose of both the ordained priesthood and the common priesthood of all baptized Catholics is to change the world with love, Pope Benedict XVI said.

The priesthood of Christ, “which the church inherited and continues throughout history, in the double form of the common priesthood of the baptized and that of ordained ministers,” aims “to transform the world with the love of God,” he said at Mass June 3.

In his homily at the Mass for the feast of the Body and Blood of Christ in Rome’s Basilica of St. John Lateran, Pope Benedict focused his remarks on the priesthood of Christ.

The Mass was moved indoors after an early evening downpour. The pope’s traditional Corpus Christi procession through the streets of Rome to the Basilica of St. Mary Major was canceled.

To accommodate the large crowd that usually would gather for Mass on the huge lawn outside the basilica, very few chairs were set up inside. Thousands of people stood packed together for the Mass.

The liturgy ended with Pope Benedict and most of the congregation kneeling in adoration of the Eucharist for 15 minutes.

“Contemplating and adoring the Blessed Sacrament,” the pope said in his homily, Catholics recognize “the real and permanent presence of Jesus, the eternal high priest.”

Jesus was not a priest in the Jewish tradition, he said, but was more like the Jewish prophets.

“Jesus took his distance from a ritual understanding of religion,” which sometimes put more emphasis on following rules than on “observing the commandment of God, in other words, love for God and for one’s neighbor, which ‘is worth more than all burnt offerings and sacrifices,’“ the pope said, quoting the Gospel of St. Mark.

The offering Jesus made, he said, was the offering of his own pain, suffering and, finally, death on a cross in order to save the world.

Through love and prayer, “the tragic trial that Jesus faced was transformed into an offering, a living sacrifice,” he said.

The divine power of love, which made the Incarnation possible, is the same power that transformed “the extreme violence and extreme injustice” of his death “into the supreme act of love and justice,” Pope Benedict said.

“The priesthood of Christ brings suffering. Jesus really suffered, and he did so for us,” the pope said.

Jesus did not need to learn how to be obedient to God, “but we do and always will,” he said.