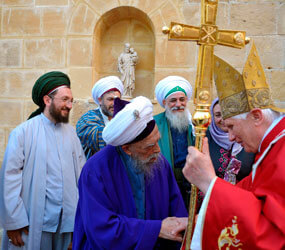 Sheik Mehmet Nazim Adil, 88, head of a Sufi confraternity – an organization dedicated to the practice and study of Islamic mysticism – met with the pope outside the Vatican nunciature in Nicosia.

During his visit to Cyprus June 4-6, Pope Benedict stayed at the nunciature, located in the U.N.-patrolled buffer zone separating the South from the North. Most of Cyprus’ Muslims live in the North, which is controlled by Turkish Cypriots, supported by troops from Turkey.

Pope Benedict did not visit the northern part of the island during his trip; Yusuf Suicmez, the chief mufti of Cyprus – the religious leader of the Muslim community – had invited the pope to cross the buffer zone for a meeting. In the end, Suicmez tried to meet the pope at the nunciature before he left Cyprus June 6, but the mufti was delayed at the buffer zone crossing and missed the pope.

Jesuit Father Federico Lombardi, Vatican spokesman, told reporters that Suicmez had called to say he was on his way and “we waited as long as we could,” but the pope could not keep the president of Cyprus and other dignitaries waiting for the airport farewell ceremony.

While the mufti has an institutional and social role among Cypriot Muslims, Sheik Nazim’s authority extends only to his disciples.

Father Lombardi said Sheik Nazim was seated on a chair on the street leading from the nunciature to the church where the pope was about to celebrate Mass.

As the pope passed in procession on the way to the church, he stopped to greet the sheik, Father Lombardi said.

The sheik told the pope, “I’m sorry. I’m very old, so I sat to wait,” the spokesman said.

Sheik Nazim brought the pope a walking stick and a set of Muslim prayer beads, Father Lombardi said. The pope gave the sheik commemorative medals of his pontificate.

The sheik asked the pope to pray for him and the pope responded that they should pray for each other, the spokesman said.

The two embraced at the end of the meeting, which lasted 3-4 minutes, the spokesman said. “It was brief and very beautiful.”