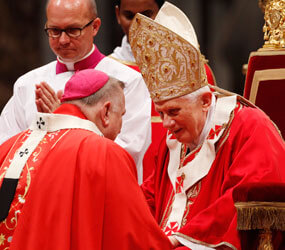 VATICAN CITY – Placing a woolen band around the shoulders of 38 new archbishops, Pope Benedict XVI told them it was a Gospel “yoke” – not a heavy burden, but a sign that by remaining united with the church in faith, they will have the strength to face whatever challenges come their way.

“Communion with Peter and his successors, in fact, is the guarantee of freedom for the pastors of the church and for the communities entrusted to them,” the pope said June 29 during his homily on the feast of Sts. Peter and Paul.

Celebrating Mass in St. Peter’s Basilica, Pope Benedict gave the archbishops from 26 countries, including Vietnam, the woolen pallium as a sign of their sharing with him authority over the faithful in their archdioceses.

The archbishops, named in the past year, included: Archbishops Jerome E. Listecki of Milwaukee; Dennis M. Schnurr of Cincinnati; Thomas G. Wenski of Miami; and Albert LeGatt of Saint-Boniface, Manitoba.

In his homily, the pope said the church has faced persecution throughout history, but it suffers greater damage “from that which pollutes the faith and Christian life of its members and its communities, attacking the integrity of the mystical body, weakening its capacity for prophecy and witness, tarnishing the beauty of its face.”

Jesus promised the church would be free – not just from physical destruction, but also from spiritual defeat by the devil, he said.

Unity with the church and with the pope, he said, guarantees that “the local churches and bishops’ conferences have freedom in relation to local, national or international powers which can, in some cases, block the church’s mission.”

But even more importantly, communion with the pope “is the guarantee of freedom in the sense of full adhesion to the truth, to the authentic tradition, so that the people of God are preserved from errors concerning faith and morals,” he said.

The pallium is the “yoke” Jesus spoke about; it does not weigh down the person carrying it, but supports him in his unity with the rest of the church, the pope said.

Giving and receiving the woolen band is “a gesture of communion” with the church whether it is threatened with “political interference or other harsh trials” or even “in the case of communities that suffer under the influence of misleading doctrines or ideological tendencies and practices contrary to the Gospel,” Pope Benedict said.

Still, he said, Jesus’ promise that the forces of evil would not prevail against the church guarantees that it will be free “both from the material bonds that seek to impede or constrain its mission, as well as from spiritual and moral evils that can attack its authenticity and credibility.”

In the presence of a delegation from the Ecumenical Orthodox Patriarchate of Constantinople, the pope said, “one of the typical effects of the action of the Evil One is division within the ecclesial community. Divisions, in fact, are symptoms of the force of sin.”

Thanking the Orthodox delegation for celebrating the feast with the Catholic community, the pope also said he was confident that a renewed faith in Jesus and continuing commitment to dialogue would bring unity one day.

Archbishop LeGatt of Saint-Boniface, Manitoba, said he had been reading about the pallium before coming to Rome and while it is a sign of the authority he shares with the pope, “it’s really a sign of service, a sign of the service of communion within the church, of the unity of faith and the unity of charity that I’ve been entrusted with, that all the baptized are entrusted with.”

The six crosses on the pallium are a sign that bishops are called to love people as Christ did – with total self-giving, he said. “It’s a call to a kind of ministry, a kind of pastoral ministry, a way of being good shepherd along with the Holy Father who is the shepherd of all the church. It’s a real call to continue growing in my own spirituality, my own faith, to be a more proper instrument of that communion,” he said.