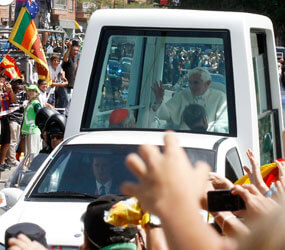 MADRID – Listening to and praying with energetic young Catholics is a joy, Pope Benedict XVI told the king of Spain.

“I have come here to meet thousands of young people from all over the world, Catholics committed to Christ, searching for the truth that will give real meaning to their existence,” the pope told King Juan Carlos Aug. 18 at Madrid’s Barajas airport.

The king, walking with a crutch, and Queen Sofia welcomed the pope, as did 50 Spanish boys and young men dressed as Swiss Guards to make the pope feel at home.

Pope Benedict told the royal family, Spanish bishops and dignitaries at the airport that joining hundreds of thousands of young people at World Youth Day was the motive for his third papal trip to Spain and his 20th trip outside of Italy since becoming pope in 2005.

Many participants at the youth gathering “have heard the voice of God, perhaps only as a little whisper, which has led them to search for him more diligently and to share with others the experience of the force which he has in their lives,” the pope said.

Faith gives the young people the strength to look with hope and confidence at the world and its problems, he said.

They see “superficiality, consumerism and hedonism, the widespread banalization of sexuality, the lack of solidarity, the corruption,” he said.

But with God by their sides, they walk upright, the pope said.

World Youth Day, he said, reminds them that they are not alone in their journey with God and gives them an opportunity to share their hopes, their cultures and “motivate each other along a journey of faith and life.”

“It gives me great joy to listen to them, pray with them and celebrate the Eucharist with them. World Youth Day brings us a message of hope like a pure and youthful breeze,” he said.

Young Catholics can feel alone or ignored, he said, “but they are not alone. Many people of the same age have the same aspirations and, entrusting themselves completely to Christ, they know they have a future before them and are not afraid.”

Some struggle in places where there is conflict or a lack of justice and respect; others are tempted by drugs or alcohol, while some fear the future because of economic difficulties or environmental destruction, he said.

“There are even some who, because of their faith in Christ, suffer discrimination, which leads to contempt and persecution, open or hidden, which they endure in various regions and countries. Some are harassed” to give up faith in Jesus and are not allowed even to mention his name, the pope said.

“But with all my heart, I say again to you young people: Let nothing and no one take away your peace; do not be ashamed of the Lord,” he said.

In the end, in his speech to the king and queen, the pope made only a brief reference to declining religious practice and increasing secularism in Spain.

The traditional faith of the Spanish people, which was responsible for so much missionary work, especially in the Americas, “is a great treasure which should be cared for constructively for the common good,” he said.

Even under a strong midday sun, young pilgrims and Madrid residents lined the streets from the airport to the nunciature, where the pope is staying.

Daniela Cantu of Monterrey, Mexico, was part of a group of pilgrims that spent hours waiting for a short glimpse of the pope as he entered Madrid.

“We were almost crying,” Cantu said. “We pray every day and we (saw) the one we pray for on earth.”

“Seeing the pope changes your life, no doubt,” she said.

There were no signs of the previous night’s violent protests against Spain spending taxpayer money to help finance the pope’s visit during hard economic times. Police arrested eight people and 11 – including two police officers – were injured.

World Youth Day organizers have said the event will pay for itself.

Contributing to this story was Gretchen R. Crowe in Madrid.