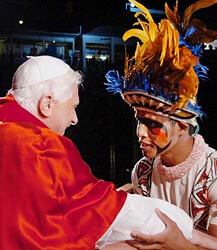 More than political platforms or social movements, it is the church’s promotion of faith in Christ that will bring relief to the suffering and needy, the pope said May 13.
“This is the priceless treasure that is so abundant in Latin America, this is her most precious inheritance: faith in the God who is love, who has shown us his face in Jesus Christ,” he said.
The pope was winding up a five-day visit to Brazil with a series of events aimed at all of Latin America. The Mass, attended by about 150,000 people on an esplanade in front of the Basilica of Our Lady Aparecida, opened the Fifth General Conference of the Bishops of Latin America and the Caribbean.
The evening before, inside the basilica, the pope gave a spiritual pep talk to Catholic priests, seminarians, religious and lay leaders, proclaiming: “The church is our home. This is our home. In the Catholic Church we find all that is good.”

In both liturgies, the pope emphasized the centrality of Christ in the church’s work of evangelization and social justice.

At the same time, he seemed to distinguish between the Catholic Church’s missionary approach and the aggressive proselytizing by evangelical sects, which have flourished in Latin America.
“The church does not engage in proselytism. Instead, she grows by attraction,” the pope said at the Mass.

By living charity day in and day out, he said, Christians release an irresistible power which is the power of holiness.”
“This is the faith that has made America the ‘continent of hope.’ Not a political ideology, not a social movement, not an economic system: faith in the God who is love,” he said, drawing applause from the crowd.
The pope added that the church’s faith in eternal salvation does not blind it to the “grief and anguish of the people of our time, especially those who are poor or afflicted.” Indeed, he said, church members are called upon to work in this world “in charity and in charity alone.”
The pope read his homily in Portuguese while seated on a wooden throne before a giant sketch of Christ. He looked alert and sounded good on the last day of a trip that began May 9 in Sao Paulo, Brazil’s biggest city.
Many of the faithful, who shaded themselves from the sun with umbrellas, had arrived at dawn for the Aparecida liturgy. Although church officials had expected half a million people, the crowd appeared considerably smaller than that.

The pope personally chose Aparecida as the site for the bishops’ meeting to underline the region’s devotion to Mary. More than 7 million pilgrims arrive each year at the shrine, built near a spot where fishermen pulled an image of Mary from a river in the 18th century.

At the Mass, he said the liturgy would place the bishops’ general conference “on the firm basis of prayer and the Eucharist.”

The pope said that, as in the early Christian centuries, when church leaders come together they should do so in the spirit of “community discernment,” able to discuss and argue about issues, but in an attitude of openness to the Holy Spirit.
“This is the ‘method’ by which we operate in the church, whether in small gatherings or in great ones,” he said.
On May 12, the pope prayed the rosary with thousands of pastoral workers and lay movement members who packed the basilica. In a talk that was repeatedly interrupted by applause, the pontiff drew a big cheer when he told them simply: “The pope loves you.”
He emphasized that the church’s message is a saving one.
“Anyone who accepts Christ – ‘the way, the truth and the life’ – in his totality is assured of peace and happiness, in this life and in the next,” he said.

“For this reason, the pope has come here to pray and to bear witness with you all: It is worth being faithful, it is worth persevering in our faith,” he said.
Touching on a common theme of his trip, he said strong faith must be based on a solid doctrinal and spiritual formation. He encouraged widespread use of the Catechism of the Catholic Church and its accompanying compendium.