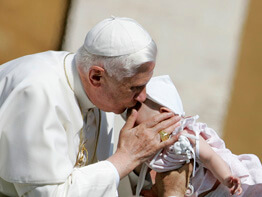 VATICAN CITY – On the feast of the Most Holy Name of the Blessed Virgin Mary, Pope Benedict XVI said the church is called to be like the mother of God and look to Christ.
The church is called to pay witness to the sanctity of life and work toward a future of peace, he said.
The pope used his general audience Sept. 12 to share reflections about his Sept. 7-9 visit to Austria. He returned briefly to the Vatican from his papal summer villa south of Rome to greet the estimated 12,000 people gathered in St. Peter’s Square and thank all those who made his apostolic pilgrimage a success.
“It was a great joy for me to return as the successor of Peter” to Austria’s Marian sanctuary at Mariazell, helping celebrate the shrine’s 850th anniversary, the pope said.
He said he was struck particularly by the “exemplary courage of thousands and thousands of pilgrims who, despite the rain and cold,” turned out for the Sept. 8 Mass outside the shrine. The sanctuary’s wooden statue of Mary and the child Jesus reminds people to look at Christ through Mary’s eyes, “which means encounter God (who is) love and who was made man and died on the cross for us,” the pope said.
He said separate meetings with the Austrian president and diplomats during his trip represented “precious occasions” for him to urge leaders to foster peace and “authentic economic and social development.”
He emphasized the importance of Europe’s Christian roots, which promote “a tradition of thought that ties faith, reason and feeling” together and safeguards the modern conscience from nihilistic or fundamentalist tendencies.
The pope again called on people to keep Sunday special and keep it from becoming just “a weekend” or a time to engage in “mundane and commercial” endeavors.
While a group of fourth-century Tunisian martyrs declared that “we cannot live without the Lord and his day,” modern Christians cannot live without Sunday either, he said.
It is a day “that gives meaning to work and rest,” highlights the significance of creation and redemption, and “expresses the value of freedom and helping others,” Pope Benedict said.
The pope said the large numbers of joyous pilgrims who attended events in Vienna and Mariazell highlighted the vivacity, fidelity and diversity of the Catholic Church. They represent a church that like Mary “is called to always look to Christ so as to show and offer him to everyone,” said the pope.
The church is a “teacher and witness” of Mary’s unconditional “yes” to God and life, he said, while it also carries out its millennial tradition of being “at the service of a future of peace and true social progress for the whole human family.”