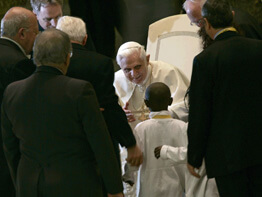 VATICAN CITY – Highlighting the fidelity and responsibility of women in the early Christian community, Pope Benedict XVI said the church could not have grown and developed as it has without the contribution of women.

“The history of Christianity would have had a very different development if it had not been for the generous support of many women,” he said Feb. 14 at his weekly general audience.

Pope Benedict said that as he neared the end of his audience series on the apostles and early church leaders, he wanted to focus on “the many female figures who played an effective and precious role in spreading the Gospel. Their witness cannot be forgotten.”

The pope said the women who helped spread the Gospel and ensure the growth of Christianity – such as Mary Magdalene, Mary and Martha, Joanna, Susanna, Priscilla and Phoebe – should be known, honored and remembered.

Going through New Testament references to women in the life of Jesus and the early Christian community, Pope Benedict did not get into questions such as the ordination of women to the priesthood and diaconate.

Instead, he said Jesus freely chose only men to be among the Twelve Apostles, “fathers of the new Israel” – the church – and he said the New Testament reference to Phoebe as a “deacon” was an indication of her important responsibility in the community at a time before the title took on a “hierarchical” meaning, implying ordination.

Still, the pope said, it must be recognized that “unlike the Twelve, the women did not abandon Jesus at the hour of his passion,” and, in fact, it was a woman – Mary Magdalene – who announced to the apostles the fact that Jesus had risen from the dead.

Of course, the pope said, among the women who played “an active role” in the life of Jesus and the early church, the most important was Mary, “who with her faith and her maternity, collaborated in a unique way in our redemption.”

Pope Benedict said that St. Paul, in his New Testament letters, makes clear that women were essential in the life of the early church and that they are called to use their gifts for the good of the community.

St. Paul explained “the fundamental principle according to which, among the baptized, not only is there no longer (a distinction between) Jew or Greek, slave or free, but not even male or female,” the pope said.

“The reason is that we are all one in Jesus Christ,” he said. “All of us share the same basic dignity, although each with his or her specific function.”

The pope told the estimated 8,000 people at the audience, “We thank the Lord because he leads his church generation after generation, relying without distinction on men and women who make their faith and baptism fruitful for the good of the entire body of the church community.”

Before his main audience, the pope met in St. Peter’s Basilica with 12,000 pilgrims and their bishops from 13 dioceses in central Italy. The bishops were at the Vatican for their “ad limina” visits, which bishops make every five years to report on the status of their dioceses.

To the delight of the crowd, Pope Benedict announced that he would be visiting their region on the occasion of the Sept. 1-2 Italian Catholic youth meeting in Loreto.