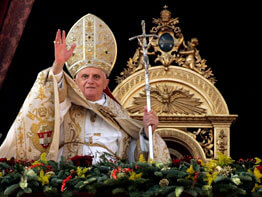 VATICAN CITY – Pope Benedict XVI welcomed Christmas as a “day of great hope” and said its message of peace is sorely needed in a world beset by war, poverty and injustice.

In his Christmas day blessing delivered from the balcony of St. Peter’s Basilica, the pope appealed for an end to “the grim sound of arms” in Iraq, the Middle East, Afghanistan, Sudan’s Darfur and other “crisis situations that are frequently forgotten.”

“May the child Jesus bring relief to those who are suffering and may he bestow upon political leaders the wisdom and courage to seek and fund humane, just and lasting solutions,” he said.

The night before, celebrating midnight Mass in St. Peter’s Basilica, the pope said Christmas should be experienced as a feast of “restored creation” in a spoiled and polluted world.

That will happen when modern men and women make time and space for God, he said.

around the world, and the pope pronounced Christmas greetings in 63 languages – including for the first time Guarani, an indigenous language of South America.

In English, the pope said: “May the birth of the Prince of Peace remind the world where its true happiness lies; and may your hearts be filled with hope and joy, for the Savior has been born for us.”

In the message accompanying his “urbi et orbi” blessing to the city of Rome and to the world, the pope emphasized that Christ’s gift of hope and salvation is offered to all peoples, especially those suffering from oppression and lack of basic rights.

“It is the most vulnerable members of society – women, children, the elderly – who are so often the victims of brutal armed conflicts, terrorism and violence of every kind, which inflict such terrible sufferings on entire populations,” he said.

“At the same time, ethnic, religious and political tensions, instability, rivalry, disagreements, and all forms of injustice and discrimination are destroying the internal fabric of many countries and embittering international relations,” he said.

He also cited the rising number of refugees and evacuees from natural disasters, often caused by “alarming environmental upheavals.”

The birth of Christ brought a healing message of peace to the world, the pope said. But to receive it, faith and humility are required, he said.

“Who has time to listen to his word and to become enfolded and entranced by his love?” he asked.

“Do we have time and space for God? Can he enter into our lives? Does he find room in us, or have we occupied all the available space in our thoughts, our actions, our lives for ourselves?” he said.

Yet while the reality of a closed world can be seen daily, “God does not allow himself to be shut out,” the pope said. He finds a space, “even if it means entering through the stable,” he said.

The pope noted a medieval tradition of Nativity scenes depicting the stable as a crumbling palace, whose former splendor has gone to ruin. The “new palace” brought by Christ is built not on royal power but on self-giving love, he said.

The pope also outlined an environmental theme implicit in the church’s celebration of Christmas.

He cited St. Anselm of Canterbury, who in the Middle Ages “in an almost prophetic way, once described a vision of what we witness today in a polluted world whose future is at risk: ‘Everything was as if dead, and had lost its dignity.’”

Likewise, he said, Gregory of Nyssa, a theologian of the fourth century, saw the place of Christ’s birth, a rundown stable, as the symbol of an “ill-treated world.”

“What would he say if he could see the state of the world today, through the abuse of energy and its selfish and reckless exploitation?” the pope said.

Christ “came to restore beauty and dignity to creation, to the universe,” he said, and in this sense “Christmas is a feast of restored creation.”

The pope ended his homily by quoting from St. Augustine, who asked “Where is heaven?” and concluded that heaven can be found “in the saints and in the just.”

The pope said the saint made an important point: that the Lord is close to the humble.

“The humility of God is heaven. And if we approach this humility, then we touch heaven. Then the earth too is made new,” he said.

The Mass included prayers of the faithful in five languages, including a prayer for peace in Arabic.

A prayer in Chinese asked that all those seeking God “may receive from each of us, in words and deeds, the announcement that today the Savior is born.”

Earlier on Christmas Eve, the pope lit a candle at his apartment window as an oversized Nativity scene was unveiled in St. Peter’s Square below, next to a giant Christmas tree.