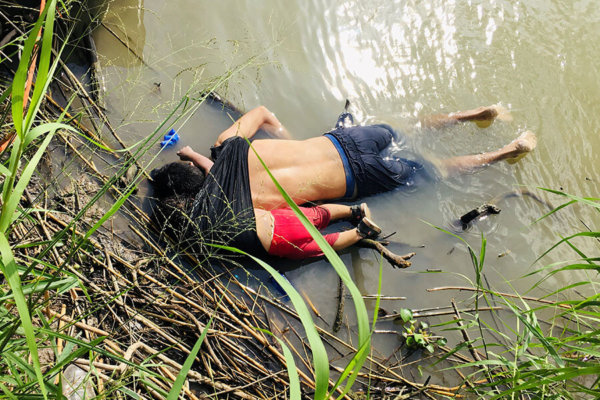 The bodies of Salvadoran migrant Oscar Alberto Martinez Ramirez and his 23-month-old daughter, Valeria, are seen June 24, 2019, after they drowned in the Rio Grande in Matamoro, Mexico, while trying to reach the United States. (CNS photo/Reuters)

VATICAN CITY (CNS) — Pope Francis was saddened after seeing photos of the lifeless bodies of a migrant father and his daughter who drowned near the U.S. border with Mexico, the Vatican said.

In response to journalists’ questions June 26, Alessandro Gisotti, interim Vatican spokesman, said the pope saw “with immense sadness” the photos of Salvadoran migrant Oscar Alberto Martinez Ramirez and his 23-month-old daughter, Valeria, lying face down in the shallow waters of the Rio Grande.

“The pope is profoundly saddened by their death and is praying for them and for all migrants who have lost their lives while seeking to flee war and misery,” Gisotti said.

In an interview with Mexican newspaper La Jornada, Martinez’s wife, Tania, said she and her husband decided to cross the Rio Grande June 23 after waiting for two months for a response to their asylum request from the United States.

Hoping to cross the river into Brownsville, Texas, Martinez first crossed with his daughter and left her along the bank while returning back to help his wife cross. However, upon being left alone, Valeria was frightened and jumped into the river.

Rushing to save her, Martinez and his daughter were instead dragged by the current. Tania was rescued by a person nearby, she told La Jornada.

The image sparked outrage against the Trump administration due to squalid conditions at migrant facilities as well as increasingly harsher policies against immigrants, many of whom are from Central America, fleeing their countries due to violence, poverty and corruption.

During his weekly general audience earlier in the day, the pope called on Christians to be more welcoming of others.

While greeting Spanish-speaking pilgrims, he praised Mexico, which has seen an increased influx of Central American migrants, “because they are so welcoming, so welcoming to migrants.”