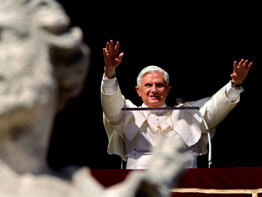 VATICAN CITY – The death of a loved one brings pain and sadness, but Christians believe their loved ones will have eternal life in Jesus Christ and that they will be united again with them in heaven, Pope Benedict XVI said.

Celebrating Mass in St. Peter’s Basilica Nov. 3 in memory of the 10 cardinals and 103 bishops who had died in the past year, Pope Benedict ended three days of commemorations of “those who have gone before us marked with the sign of faith.”

Marking the Nov. 1 feast of All Saints, the pope said just as God has created thousands of different kinds of beautiful plants and flowers, so has he given the world male and female saints, young and old, from every race and culture.

The beauty of the saints, he said during his noon Angelus address, should lead to a desire in every Christian heart to be like them and to spend eternity in their company.

Reciting the Angelus publicly again Nov. 2, the feast of All Souls, Pope Benedict said, “It is very important that we Christians live our relationship with the deceased in the truth of faith and see death and the beyond in the light of revelation.”

The subjects of death and eternal life are “realities particularly subject to superstitious beliefs,” he said without providing examples.

Repeating questions he raised in his 2007 encyclical, “Spe Salvi” (on Christian hope), the pope asked if Christian faith still gives people hope and if they still desire eternal life or think that earthly life is all there is.

While no one knows exactly “what it is or how it will be,” eternal life will be like “immersing yourself in the ocean of infinite love where time – a before and an after – no longer exist. Fullness of life and joy: This is what we hope for and expect from our being with Christ,” he said.

Celebrating the memorial Mass Nov. 3 for the cardinals and bishops who died in the last year, Pope Benedict said the hope that they will enjoy eternal life in heaven is not based on their age or wisdom or achievements, but on the fact that they dedicated themselves to Christ and to serving others.

“The world gives credit to the ‘wise’ and ‘talented,’ while God shows special favor to the little ones,” he said.

The 103 bishops remembered at the papal Mass included six from the United States: Bishops James D. Niedergeses of Nashville, Tenn.; Daniel A. Hart of Norwich, Conn.; Donald W. Montrose of Stockton, Calif.; Charles A. Buswell of Pueblo, Colo.; and Auxiliary Bishops Juan A. Arzube of Los Angeles and Walter Paska of the Ukrainian Archeparchy of Philadelphia.