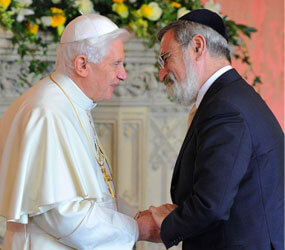 LONDON – In a world where religious convictions are misunderstood or mocked, members of every religion have an obligation to live in peace with each other and work together to show that faith does not breed ignorance and hatred, Pope Benedict XVI said.

“The spiritual dimension of our lives is fundamental to our identity as human beings,” the pope said Sept. 17 during a meeting with representatives of Great Britain’s Jewish, Muslim, Hindu and Sikh communities. The gathering took place at St. Mary’s University College in Twickenham, a London suburb.

“All of us, in our different ways, are personally engaged in a journey that grants an answer to the most important question of all – the question concerning the ultimate meaning of our human existence,” the pope said.

The sciences give people important information that helps them understand the way the physical universe works and that knowledge is important to religious believers like anyone else, he said.

“Yet these disciplines do not and cannot answer the fundamental question” about the meaning and purpose of life “because they operate on another level altogether,” the pope said.

Only faith can fully explain the origin and destiny of each individual and answer the question, “Why is there something rather than nothing?” Pope Benedict said.

The interreligious meeting took place on the second day of the pope’s four-day visit to Great Britain. As in his earlier talks and homilies, the pope used the gathering as an opportunity to explain the continuing importance of faith, even in a technologically and intellectually advanced society that often looks upon religion as a naive or dangerous superstition.

“Genuine religious belief,” he said, is not focused so much on what is useful now, but what is essential for eternal happiness.

“It reminds us of the possibility and the imperative of moral conversion, of the duty to live peaceably with our neighbor, of the importance of living a life of integrity,” the pope said.

No one at the meeting mentioned the tensions caused in Catholic-Muslim relations in 2006 when Pope Benedict offended Muslims during a speech in Germany nor the tensions that arose in Catholic-Jewish relations in the last two years after Pope Benedict lifted the excommunication of a traditionalist bishop who denied the extent of the Holocaust and moved forward the sainthood cause of Pope Pius XII, who was pope during World War II.

Pope Benedict pledged the Catholic Church would “continue to work to build bridges of friendship to other religions, to heal past wrongs and to foster trust between individuals and communities.”

But he also said that to be fruitful, the relationship requires “reciprocity on the part of all partners in dialogue and the followers of other religions,” especially in defending the right of all people to practice their faith and follow their conscience without fear of being ostracized or persecuted.

England’s chief rabbi, Lord Jonathan Sacks, welcomed the pope as the “leader of a great faith” to a land where battles once were fought in the name of religion in the Middle Ages and where tensions between different communities continued through the early part of the 20th century.

The rabbi told the pope that while members of different religions obviously believe some very different things, they all believe in a creator and in virtues and values that can strengthen society by protecting and promoting human life and dignity.

Khaled Azzam, a Muslim and director of the Prince’s School of Traditional Arts, told the pope, “We all face a world that has chosen to deny the existence of the divine,” but has shown its need to recognize something bigger than the individual by turning environmentalism into a religion.

Faith is important, he said, not only because religions give people a moral code necessary for living at peace with one another, but because it helps them recognize that there is a reality – God – that transcends the limits of this world and calls them to eternity.