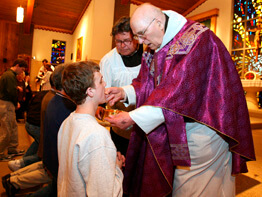 LATE BREAKING
VATICAN CITY – In a long-awaited overture to disaffected Catholic traditionalists, Pope Benedict XVI relaxed restrictions on the use of the Tridentine Mass, the Latin-language liturgy that predates the Second Vatican Council.

The pope said Mass celebrated according to the 1962 Roman Missal, commonly known as the Tridentine rite, should be made available in every parish where groups of the faithful desire it.

He said that while the new Roman Missal, introduced in 1970, remains the ordinary way of Catholic worship, the 1962 missal should be considered “the extraordinary expression of the law of prayer.”

This implies no liturgical division, he said, but simply “two uses of the one Roman rite.”
The pope’s directive came July 7 in a four-page apostolic letter to the world’s bishops titled “Summorum Pontificum.” The new norms will take effect Sept. 14, the feast of the Exaltation of the Holy Cross.

An accompanying personal letter from the pontiff dismissed fears that the decree would foment divisions in the church or be seen as a retreat from Vatican II.

The pope said the new Mass rite would certainly remain the church’s predominant form of worship. Use of the old missal presupposes a certain degree of liturgical formation and some knowledge of the Latin language, and “neither of these is found very often,” he said.

But the pope expressed sympathy with Catholics who are attached to the Tridentine rite and uncomfortable with the new Mass. In the post-Vatican II period, he said, excessive liturgical creativity often led to “deformations of the liturgy which were hard to bear.”

“I am speaking from experience, since I, too, lived through that period with all its hopes and confusion. And I have seen how arbitrary deformations of the liturgy caused deep pain to individuals totally rooted in the faith of the church,” he said.

The pope noted that many older Catholics have a long connection with the 1962 Roman Missal. But in recent years, he said, it has been clearly demonstrated that young people are also being attracted by the old liturgy.

By widening its availability, the pope said, he hoped to make the new and old liturgical forms “mutually enriching.”

The Tridentine Mass has been allowed as a liturgical exception since 1984, but Catholics had to request permission from local bishops, who did not always consent.

The new decree significantly altered the bishop’s role, maintaining his general oversight on liturgy but removing him from initial decisions on Tridentine Masses.

The document said a priest who wishes to celebrate the Tridentine Mass alone “does not require any permission,” and lay Catholics who spontaneously wish to attend such semi-private Masses may do so.

Local pastors are to handle more formal requests for scheduled Masses, the document said. The text does not require all parishes to automatically establish a Tridentine Mass schedule, but it said that where “a group of faithful attached to the previous liturgical tradition exists stably,” the pastor should “willingly accede” to their request to make the old Mass available.

In scheduling Tridentine Masses, the document said local pastors should balance these special requests with the ordinary pastoral demands of the parish. It offered some guidelines: On Sundays and feast days, parishes may offer only one Tridentine Mass; the old Mass can also be celebrated on weekdays and in particular circumstances such as weddings, funerals or pilgrimages. It said bishops may celebrate the sacrament of confirmation according to the old rite, too.

When a group of the lay faithful “does not obtain what it requests from the pastor,” it should inform the local bishop, who is “earnestly requested to grant their desire,” the document said. If the bishop is unable to provide for this kind of celebration, the matter goes to the Vatican’s Pontifical Commission “Ecclesia Dei,” which is charged with “maintaining vigilance over the observance and application” of the new decree, it said.

Religious orders may offer Tridentine Masses in conventual or community celebrations in their own oratories, it said.

The document also gave bishops the power to erect a “personal parish” for celebrations according to the old liturgy.

The text allowed for Mass readings in local languages, even when the 1962 missal is being used, using a Lectionary, or book of Mass readings, that has been approved by Vatican. In his personal letter, the pope also suggested that new saints and new prefaces should be inserted in the 1962 missal; that question will be studied by the “Ecclesia Dei” commission.

Priests may use the Roman Breviary of 1962 to pray the Liturgy of the Hours, including morning prayer and evening prayer, the document said.

Unlike the 1984 indult offered by Pope John Paul II, the new decree did not explicitly state that those requesting permission for the Tridentine Mass must accept the legitimacy of the new Mass. Vatican sources said such acceptance would be presumed, however.
In his personal letter, Pope Benedict said the priests who celebrate according to the Tridentine rite cannot, as a matter of principle, exclude celebrating the new Mass.

“The total exclusion of the new rite would not, in fact, be consistent with the recognition of its value and holiness,” he said.

That could be an important point in the Vatican’s ongoing reconciliation efforts with the members of the Society of St. Pius X, founded by the late Archbishop Marcel Lefebvre, who was excommunicated in 1988. The society rejects the new Mass and several teachings of Vatican II.

The pope invited bishops to report on implementation of the new decree after three years. If serious problems emerge, “ways to remedy them can be sought,” he said.

The publication of the decree came after nearly two years of review. Although it was issued “motu proprio,” a phrase that signifies a pope is acting on his own initiative, Pope Benedict consulted on the question with the world’s cardinals and bishops.

The strongest apprehensions were voiced by French and German bishops, who worried that internal church unity – and their own authority – could be weakened by creating parallel worshipping communities. Other bishops said the move could be seen as delegitimizing the liturgical reform of Vatican II.

The pope, in his personal letter, dismissed both fears as “unfounded.” He blamed in part “news reports and judgments made without sufficient information” for confusion over his decision and for divergent reactions ranging from joyful acceptance to harsh opposition.
He emphasized that although the new Mass of 1970 was designed to replace the old liturgy, the 1962 Roman Missal was “never juridically abrogated.” Its restoration as an extraordinary form of worship thus does not undermine the council’s decisions, he said.
“There is no contradiction between the two editions of the Roman Missal. In the history of the liturgy there is growth and progress, but no rupture,” he said.

“What earlier generations held as sacred remains sacred and great for us too, and it cannot be all of a sudden entirely forbidden or even considered harmful,” he said.
As for church unity, the pope told the bishops that he had essentially freed them from having to decide on specific requests for the old liturgy, but was relying on them to maintain communion among their faithful. In particular, he asked the bishops to demonstrate “charity and pastoral prudence” in dealing with and improving the attitude of Catholic traditionalists.

“I very much wish to stress that these new norms do not in any way lessen your authority and responsibility, either for the liturgy or for the pastoral care of your faithful. Each bishop, in fact, is the moderator of the liturgy in his own diocese,” he said.
He said that if a problem arises that the parish priest cannot resolve, the local bishop can always intervene, “in full harmony, however, with all that has been laid down by the new norms.”

The pope expressed his conviction that in relaxing restrictions on use of the pre-Vatican II liturgy, he was fulfilling a historic papal duty to maintain church communion. Looking back at divisions in the church’s history, he said, it seems that “at critical moments when divisions were coming about, not enough was done by the church’s leaders to maintain or regain reconciliation and unity.”

On the question of the old Mass, he urged the bishops: “Let us generously open our hearts and make room for everything that the faith itself allows.”

The pope did not get into specifics about how the new decree might affect the Vatican’s difficult dialogue with leaders of the Lefebvrite religious order, the Society of St. Pius X.
In his personal letter, the pope told the bishops that fidelity to the old Mass has become an external sign of identity for the Lefebvrite society, but noted that the reasons for their break with the Vatican “were at a deeper level.”

In a meeting in 2005 with the pope, Bishop Bernard Fellay, head of the society, asked for the restoration of the Tridentine rite as a sign of good will.

In the Tridentine rite, the priest celebrated Mass facing east, which – given the layout of most churches – meant he celebrated with his back to the congregation. Since the promulgation of the new Roman Missal, the priest normally faces the congregation. And while Latin is the original language of both liturgical texts, the new missal permits use of the vernacular language; because it called for full, active participation, the use of a local congregation’s language became customary.

The Roman Missal of 1962 raises an issue in Catholic-Jewish relations. Although the phrase “perfidious Jews” was no longer in the 1962 version of the missal, it did ask for prayers for the conversion of Jews and for “the blindness of that people” so they may acknowledge Christ.

The new Mass changed that language, asking prayers so that Jews, as the chosen people, “may arrive at the fullness of redemption.”

The text of the apostolic letter was officially issued only in Latin. The pope’s accompanying personal letter was made available in several languages, including English.