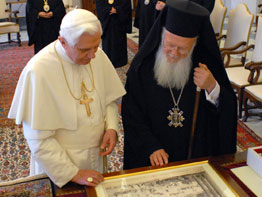 VATICAN CITY – Pope Benedict XVI and Orthodox Ecumenical Patriarch Bartholomew of Constantinople spent almost half an hour speaking privately March 6 before going into a small Vatican chapel to pray together.

Although it was the patriarch’s first visit to the Vatican since Pope Benedict’s election and the funeral of Pope John Paul II in April 2005, the visit was not a formal, orchestrated affair.

The pope and the patriarch did not exchange speeches, but instead sat across a table from each other talking.

And instead of participating in a liturgy, they walked into the tiny Chapel of Urban VIII near the papal library, stood in front of a painting of the Nativity and prayed silently.

When the prayer was finished, the two turned to their aides and together blessed them.

Pope Benedict and Patriarch Bartholomew held their first formal meeting in Turkey in 2006 and met for less formal discussions in October in Naples, Italy.

The patriarch was in Rome to help mark the 90th anniversary of the Jesuit-run Pontifical Oriental Institute, where he earned his doctoral degree.

The patriarch delivered a lecture on “theology, liturgy and silence,” focusing on how the spiritual experience of Eastern Christianity can promote Christian unity and respond to the needs of modern men and women.

Patriarch Bartholomew praised the Oriental Institute’s commitment to promoting the study of the Orthodox and Eastern Catholic churches and its contributions to Christian unity, particularly by highlighting the Eastern tradition in the heart of the Catholic Church.

“The church fathers were primarily pastors, not philosophers,” he said. “They were concerned first with reforming the human heart and transforming society, not with refining concepts or resolving controversies.”

The patriarch said that at the center of their pastoral work was a recognition that humanity is “called to know and to become God,” the call to holiness which the Orthodox term “deification.”

When Christians keep in mind the possibility that every human being and all of creation can be transformed in Christ by the power of the Holy Spirit, then they will meet every person and every situation with an attitude of awe and anticipation rather than judgment or fear, he said.

Patriarch Bartholomew said the Orthodox tradition calls for silence and humility “before the awesome mystery of God, before the sacred personhood of human beings and before the beauty of creation.”

He told students and professors of the Oriental Institute and several Vatican officials, “We must at all times be prepared to create new openings and to build bridges, ever deepening our relationship with God, with other people and with creation itself.”

The patriarch also said theologians and pastors would benefit by remembering that the early church fathers, recognized by both Orthodox and Catholics, “never perceived theology as a monopoly of the professional academic or the official hierarchy.”

“Orthodoxy,” he said, “was the common responsibility and obligation of all.”

And, he said, the liturgy – a communal celebration – was the place where the community learned, expressed and strengthened its faith.

“Whereas the gradual development in the West of a juridical source of authority led to an understanding of liturgical rites more as external signs, Eastern Christianity visualized liturgy as an authoritative criterion of faith and ethics,” seen, for example, in the practice of quoting liturgical texts in support of a theological argument, the patriarch said.

The importance of the community of believers in liturgy and in determining orthodoxy, he said, needs to be reaffirmed today because “no individual can ever exhaust the fullness of truth in isolation from others, outside the communion of saints.”

Patriarch Bartholomew said it also is essential that as Catholics and Orthodox work toward restoring their unity neither should undertake “provocative initiatives” in ministry, apparently echoing the concerns of some Orthodox churches, particularly the Russian Orthodox Church, about the re-establishment of Catholic dioceses in traditionally Orthodox regions.