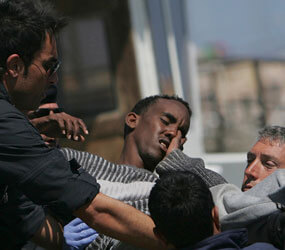 VATICAN CITY – Pope Benedict XVI offered prayers for at least 150 refugees, including women and children, whose boat sank off the Italian island of Lampedusa after they fled Libya.

“The tragedy of the death at sea of such a large number of migrants from North Africa trying to reach Europe has deeply saddened the Holy Father,” said Jesuit Father Federico Lombardi, director of the Vatican press office.

Father Lombardi spoke April 7, the day after the Italian military and international aid agencies reported the sinking of the vessel, which may have been carrying as many as 300 passengers. The boat, which sailed from Libya, was carrying asylum seekers from Somalia, Nigeria, Bangladesh, Ivory Coast, Chad and Sudan, said the Geneva-based International Organization for Migration.

The Italian military and a fishing boat managed to rescue 47 people. They pulled 20 dead bodies from the water and said at least 150 immigrants were missing and feared dead. The sinking of the boat in rough seas was not the first time migrants trying to reach Europe from North Africa have died crossing the Mediterranean Sea.

Father Lombardi said, “The Holy Father and the entire church remember in prayer all of the victims, including women and children, of every nationality, who lose their lives in this terrible voyage in order to flee situations of poverty, injustice or violence.”

They are seeking “protection, acceptance and more human living conditions,” he said.

Italian officials said more than 20,000 migrants have arrived on Italy’s shores from North Africa since January.

In his statement April 7, Father Lombardi said those trying to flee Libya by boat probably include Eritrean Catholics who were working in Libya when fighting broke out there in mid-March.