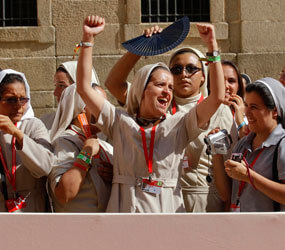 The sisters and nuns – all under 35 – gathered in the sunny courtyard of the Basilica of St. Lawrence, while the professors – most under 40 – gathered inside the imposing stone basilica.

The young consecrated women were exuberant: singing, chanting and doing the wave. Most of them stood on their plastic chairs when the pope entered. The young professors visited one another rather quietly before the pope arrived and remained standing on the floor when the pope entered; they were in a church, after all.

In speeches to both groups, the pope expressed gratitude and offered encouragement, but he once was a young professor himself, and much of his advice to the scholars was based on personal experience and a continuing keen observation of what is happening in universities around the world.

Because of political or economic pressures and influence, too many universities are becoming almost technical schools, training the young for a profession without helping them learn to seek and to love knowledge and truth and what it means to be created in God’s image, Pope Benedict said.

Catholics teaching in universities are part of a centuries-long “chain of men and women committed to teaching the faith and making it credible to human reason,” the pope said. “We do this not simply by our teaching, but by the way we live our faith and embody it.”

“Young people need authentic teachers: Persons open to the fullness of truth in the various branches of knowledge, persons who listen to and experience in their own hearts that interdisciplinary dialogue; persons, who, above all, are convinced of our human capacity to advance along the path of truth,” he said.

It’s not enough to be an expert in your subject, the pope told the professors.

“We need to realize in the first place that the path to the fullness of truth calls for complete commitment: It is a path of understanding and love, of reason and faith. We cannot come to know something unless we are moved by love; or, for that matter, love something which does not strike us as reasonable,” he said.

Also, the pope said, scholars must have humility, “since it protects us from the pride that bars us from the truth.”

“We must not draw students to ourselves, but set them on the path toward the truth, which we seek together,” he said.

Maria Sacristan, 41, a professor of corporate strategy at King Juan Carlos University in Madrid, said, “God must also be at the university – even in corporate strategy. I must teach my students business ethics, but also in a university we talk about everything – why exclude God?”

Father Christoph Ohly, 44, who teaches canon law at the University of Trier, Germany, said he came to the meeting because “it’s important that these conversations take place in the university, not just in the theology faculty, but in medicine and engineering and other subjects.”
While the mood was more effervescent in the courtyard with the sisters and nuns, the pope’s message was no less challenging.

Sister Belen, a member of the Servants of Mary who cares for the aged in their homes, thanked the pope for recognizing religious life as “a visible expression of the holiness of the church.”

“The church is holy because it is united with Christ and because, within its heart, holiness blooms like a marvelous garden of different flowers,” she said. “All of us here want to be saints; although we know the path isn’t easy, we trust in the grace of Christ, in communion with the church and in the magisterium of Your Holiness.”

Pope Benedict told the young religious, “In a world of relativism and mediocrity, we need that radicalism to which your consecration, as a way of belonging to God who is loved above all things, bears witness.”

Through their lives and vows, he said, religious become a “living exegesis” or explanation of God’s word of love and salvation.
“Your lives must testify to the personal encounter with Christ which has nourished your consecration, and to all the transforming power of that encounter,” he told them.

“The church needs your youthful fidelity, rooted and built up in Christ,” he told them before intoning the Lord’s Prayer in Latin. As the high, light voices of the sisters filled the courtyard, the pope sang more and more quietly.

Sister Marta, 29, a Mexican member of the Carmelite Servants of the Holy Family, said being at the meeting with the pope and so many other young religious was “a dream come true. All of these people feel what you feel: You want to change the world with your prayers, with what you do and who you are. It’s one feeling, one with Christ and the church.”

She said that before the pope arrived the sisters were asking each other which order they belonged to and what their order’s special mission was.

“It was amazing,” she said. “The Holy Spirit has a lot of imagination.”