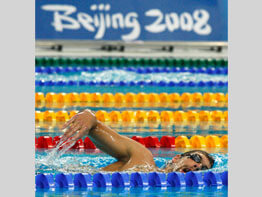 BRESSANONE, Italy – Pope Benedict XVI offered his best wishes to China, the International Olympic Committee and all the athletes who will participate in the Aug. 8-24 games in Beijing.

“I am happy to send the host country, the organizers and participants – especially the athletes – my cordial greeting with the hope that each one can give the best of his- or herself in the genuine Olympic spirit,” the pope said Aug. 3.

Pope Benedict spoke about the Olympics after reciting the midday Angelus prayer with about 9,000 people gathered in the square in front of the Bressanone cathedral.

The pope said he would be following the Olympic Games.

“I deeply hope that it will offer the international community a valid example of coexistence among people of the most diverse backgrounds with respect for their common dignity,” he said.

He prayed that the Olympic events would be a sign of “brotherhood and peace among peoples.”

The pope was spending his annual mountain vacation with his brother, Monsignor Georg Ratzinger, at the Bressanone seminary.

In addition to thanking his hosts and everyone involved in assuring his comfort and the safety of the crowds who filled the city center for the Angelus, the pope said, “Naturally, we thank the good God who has given us this earth and this Sunday flooded with sun.”

The day’s Gospel reading about Jesus multiplying the loaves and fishes is a reminder that “if we have received such great things from God, we must give in turn,” the pope said.

“We must transmit to others the gifts of goodness, love and friendship, but at the same time we also must give material gifts to those who need us and who we can help,” he said.

“Paul VI guided the people of God in contemplating the face of Christ, redeemer of humanity and Lord of history,” he said.