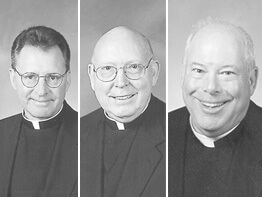 Pope Benedict XVI has recognized the exemplary ministry of three priests of the Archdiocese of Baltimore by conferring on them the honorary title of monsignor.

“The naming of a new prelate of honor and of new chaplains to His Holiness brings to the Archdiocese of Baltimore an additional reason for pride,” said Cardinal Keeler. “The Holy Father has recognized three of our priests by so singling them out.”

The cardinal added that he was “enormously grateful to all of our priests who themselves are worthy of similar recognition.”

The title “monsignor” literally means “my lord,” stretching back to the time when bishops were the equivalent of barons, according to Monsignor Steven Rohlfs, rector of Mount St. Mary’s Seminary in Emmitsburg. Monsignors were part of the “higher clergy” and were addressed in the same way a regular nobleman would have been addressed, he said.

Today, the title is a sign of personal esteem from the pope and it’s conferred at the request of the bishop, according to Monsignor Rohlfs. Normally no more than 10 percent of the clergy in a diocese can have the title, he said.
The date for the investiture ceremony recognizing the new monsignors has not been set.

“Surprised” and “humbled” by his selection as a new monsignor, Monsignor Farmer said his parishioners were “very happy” for him when they heard the news of his new title at morning Mass.

“It’s a very exciting time,” he said. “It was something I never expected.”
Monsignor Farmer has been pastor of St. Ursula in Parkville for less than a year. He was the pastor of St. Thomas Aquinas in Hampden from 1992-2006 and previously served at Immaculate Conception in Towson from 1980-86 and St. Clement Mary Hofbauer in Rosedale from 1987-92.

In addition to his parish ministries, Monsignor Farmer has been a leader in the Maryland prolife community, serving in leadership roles in the archdiocesan prolife committee.

“The priesthood is a great life,” he said. “We connect people to Jesus and Jesus to people. All priests work hard to do good.”

Monsignor Feild called it a “thrill and an honor” to be recognized by Pope Benedict XVI and Cardinal Keeler as monsignor.

“I was very pleased and very surprised,” said Monsignor Feild, who jokingly said he thought he was “in trouble” when the cardinal invited him to dinner at his residence without telling him the reason for the invitation.

“It’s not just for me, it’s for my parish and my family,” he said. “Everyone is just thrilled.”

The 74-year-old priest said his ministry has focused on serving people in his parishes, but he has also been involved in ecumenical activities.

Monsignor Tillman said he was in a state of “joyful confusion” after receiving word from the cardinal that he had been named a monsignor.

“I said there needs to be a recount,” the priest said with a laugh.

“I was really overwhelmed by it,” he said. “The cardinal was very gracious and very generous.”

The priest has been very active in ecumenical and interfaith efforts, promoting better understanding between Christians and those of other religions.

“Being caught up in the life of a vibrant body of Christ is an exciting and full-time adventure,” he said.

The oldest of five brothers, Monsignor Tillman grew up in Immaculate Conception parish in Towson and was ordained in 1965 after studying at St. Mary’s Seminary on Paca Street in Baltimore.

Meghan Walton contributed to this article.