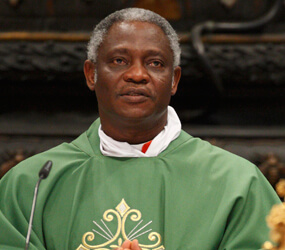 VATICAN CITY – During a special synod dedicated to peace and justice in Africa, Pope Benedict XVI named African Cardinal Peter Turkson as head of the Vatican’s justice and peace council.

When the Vatican spokesman, Jesuit Father Federico Lombardi, announced the appointment Oct. 24 at the start of a synod press conference, the 61-year-old cardinal smiled broadly and giggled as journalists applauded. The personable and enthusiastic cardinal told the press that he accepted the new post with humility and thanked the pope for giving him the opportunity to serve the church in this new role.

The pope also announced the appointment later that day during a special luncheon with bishops attending the synod.

The former archbishop of Cape Coast, Ghana, succeeds 76-year-old Cardinal Renato Martino, who has retired as president of the Pontifical Council for Justice and Peace.

Cardinal Turkson, Ghana’s first cardinal, enjoyed a high profile during the Oct. 4-25 second special Synod of Bishops for Africa. He served as the synod’s recording secretary – a key role many had already seen as a clear sign of papal favor.

During the synod he spoke very candidly to reporters Oct. 5 about condoms being unreliable in preventing the transmission of the HIV virus and said they may even facilitate the spread of the disease by giving people “a false sense of security” and thereby fostering promiscuity.

He spoke out on the need for the Catholic notion of justice in Africa and the world.

God’s justice does not demand payment for wrongdoing “because God overlooks our transgressions … and admits us into communion,” he said during the Oct. 5 press conference.

When Christians think like God does, they begin to forgive one another and recognize each other as brothers and sisters no matter what their nationality or ethnicity, he said.

Cardinal Turkson gained brief global attention at the 1994 Synod of Bishops for Africa, where he said the church should pay more attention to the “signs and wonders” of the faith and not limit its teaching to “books and catechisms.” He encouraged a rediscovery of the Christian ministry of healing.

Pope John Paul II showed his admiration for Cardinal Turkson by making the 55-year-old archbishop a cardinal in the 2003 consistory.

Cardinal Turkson has been active in interreligious dialogue in Ghana and said in a 2007 interview that Catholics there were being taught the Quran, the sacred book of Islam, and Islamic scriptures to further dialogue and community cohesion.

He said the church has adopted a “dialogue of action” in which Muslims and Catholics come together to cooperate on concrete projects such as drilling wells and building schools.

During the Synod of Bishops on the Eucharist in 2005, the cardinal stressed the need to incorporate dignified African styles of worship during Mass that could include ululation – a joyful or mournful high-pitched cry – or tam-tam drums.

In another interview in 2005, he said that while the church was thriving in Africa traditional cultures and values had not been transformed by the Gospel. “We need a more deeply rooted experience of conversion,” he said.

The challenge for the church, he said, is to find a way to make an impact in the secular world “on the political level, in terms of good government and political conflicts that degenerate into tribal conflict.”

In Ghana, Cardinal Turkson led the effort to establish the country’s first Catholic university where he has served as chancellor.

Born Oct. 11, 1948, in western Ghana, he studied at St. Theresa’s Minor Seminary in Amisano and Pedu before attending St. Anthony-on-Hudson Seminary in Rensselaer, New York, where he earned a bachelor’s degree in theology.

He was ordained a priest in 1975 and from 1976 to 1980 studied in Rome, earning a licentiate in sacred Scriptures at the Pontifical Biblical Institute. From 1987 to 1992, he studied for his doctorate at the same institute.

In addition to English and the local Fante language, he speaks French, Italian, German and Hebrew fluently. He has written knowledge of Latin and Greek.

Cardinal Turkson has served as a member of the Vatican’s justice and peace council since 2008.

He is also a member of the Pontifical Council for Promoting Christian Unity, the Congregation for Divine Worship and the Sacraments, the permanent council of the Synod of Bishops, and the Supreme Committee of the Pontifical Missionary Societies.