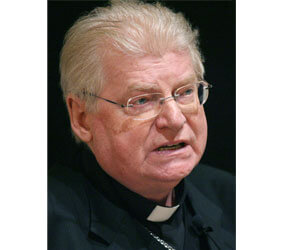 Cardinal Scola, 69, has been patriarch of Venice since 2002. A respected theologian, he developed a reputation in Venice as an energetic pastor, raising the church’s profile in the civil arena.

In 2004, he founded Oasis, an international foundation that acts as a forum for dialogue and a bridge of support for Catholics in the Middle East. It has hosted numerous international conferences attended by experts on Islamic-Christian relations.

Cardinal Scola was mentioned by many experts as a possible papal candidate in 2005. Since then, he has helped guide a Synod of Bishops on the Eucharist and addressed the United Nations on the topic of interreligious dialogue.

The son of a truck driver, Cardinal Scola took to his assignment in Venice with relish, visiting local communities in an effort to help restore the parish as a spiritual and social meeting ground.

In an interview in 2005 with Catholic News Service, he said the “crisis of Christianity today is that our communities are fragile, and the sense of belonging is weak, because the people are lost.”

“Why are the people lost? Why is the community weak? Because I think we have forgotten a little about the basic elements of the human being – his emotions and desires, how he lives concretely, how he experiences work, marriage, the family and his neighborhood,” he said.

Cardinal Scola has argued that if the church wants to reach people where they live, it has to move out of the sacristy and into all sectors of civil society.

“As Christians, that means we must have the courage to show our face, to say what freedom really is … and to propose to civil society an ideal of the good life,” he said.