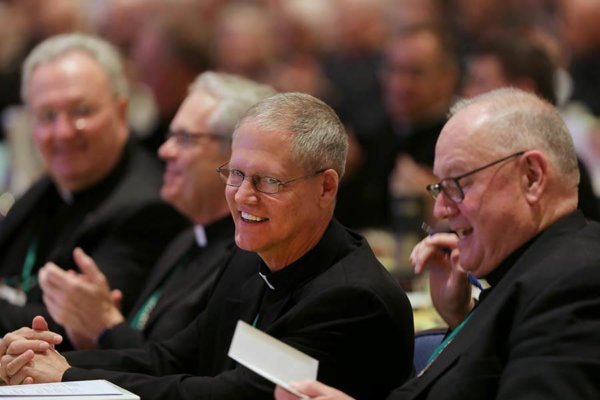 Archbishop Paul D. Etienne of Anchorage, Alaska, center, smiles alongside New York Cardinal Timothy M. Dolan, right, at the fall general assembly of the U.S. Conference of Catholic Bishops in Baltimore Nov. 14, 2018. Pope Francis has named Archbishop Etienne to be coadjutor archbishop of the Archdiocese of Seattle, meaning he will assist and could succeed Archbishop J. Peter Sartain in leading the archdiocese. (CNS photo/Bob Roller)

WASHINGTON — Pope Francis has named Archbishop Paul D. Etienne of Anchorage to be coadjutor archbishop of the Archdiocese of Seattle, meaning he will assist and could succeed Archbishop J. Peter Sartain in leading the archdiocese.

Archbishop Etienne, who will celebrate his 60th birthday June 15, has been in Anchorage since October 2016.

Archbishop Sartain, who will turn 67 June 6, has led the Seattle Archdiocese since 2010.

Archbishop Etienne was preparing for Holy Week on the morning of Saturday, April 13, when he got a call from Archbishop Christophe Pierre. the apostolic nuncio to the United States, saying Pope Francis had appointed him coadjutor archbishop of the Archdiocese of Seattle.

“To say I was caught off guard would be an understatement,” Archbishop Etienne told Northwest Catholic, magazine for the Seattle Archdiocese. “You just never expect these phone calls.”

Nevertheless, he said, “My answer was immediately to say yes.”

In his nearly 27 years as a priest and 10 years as a bishop, he’s learned to trust in God’s providence when the Holy Father asks him to take on a new responsibility, “to follow the Lord to another land.”

Archbishop Etienne’s appointment was announced by the nuncio April 29; a “rite of reception” Mass — because Archbishop Sartain remains archbishop of Seattle — will be celebrated June 7 at St. James Cathedral in Seattle.

Archbishop Sartain explained in an April 29 letter to archdiocesan Catholics that a series of spinal issues prompted him to write to Pope Francis last September requesting the appointment of a coadjutor archbishop, “with a view toward retiring much sooner than typical, because of my health.”

“To say that I am delighted by the Holy Father’s choice would be an understatement,” Archbishop Sartain wrote. “Archbishop Etienne is a wonderful shepherd whose love for the Lord is expressed through a deep life of prayer and devotion to the sacraments, as well as contagious enthusiasm for the proclamation of the Gospel and service to those in need in the name of Jesus.”

As coadjutor, Archbishop Etienne will automatically become the head of the archdiocese when Archbishop Sartain steps down.

“Archbishop Etienne and I will finalize the date later this year on which he will formally succeed me as Archbishop of Seattle,” Archbishop Sartain said.

Archbishop Etienne said he is excited about the transition to Seattle.

“I’ve had great esteem for Archbishop Sartain,” he said. “We’ve known each other since we were priests, before either one of us were ever named bishops, and he’s just a great, great man. And I have no doubt that I’m inheriting a church that’s in fine shape, having been under his guidance.”

Archbishop Etienne was born June 15, 1959, in Tell City, Indiana, to a “very Catholic family,” the second son of Paul and Kay Etienne.

His family’s roots in southern Indiana go back generations on both sides; he knew all his grandparents, who were Catholic. One of his aunts is a Benedictine nun; an uncle was a diocesan priest.

“We just had priests and nuns and seminarians in and out of our house as regularly,” he said, adding that it’s “no wonder that four out of the six kids in my family chose religious vocations and that the other two have remained as close to the church as they have.”

Two of his brothers, Bernard and Zachary, are priests of the Diocese of Evansville, Indiana. His sister Nicolette is a Benedictine nun at Our Lady of Grace Monastery in Beech Grove, Indiana.

His own calling wasn’t as clear cut. He said he initially didn’t want to be a priest and spent his young adult years “fighting a call to priesthood.”

After high school, he spent five years managing a local clothing store and said he had his own plan for his future: a self-made businessman, married with a big family and raising horses and beagles.

But, he said, “God eventually started stripping away, piece by piece, my dream to replace it with his. And his dream is far better than anything I could have come up with on my own.”

He attended Bellarmine College in Louisville, Kentucky, then the University of St. Thomas/St. John Vianney College Seminary in St. Paul, Minnesota, graduating with a degree in business administration.

From 1988 to 1992, he was a seminarian at the Pontifical North American College, where he earned a degree in sacred theology.

He was ordained a priest for the Archdiocese of Indianapolis on June 27, 1992, and returned to Rome a few years later where he received an advanced degree in spiritual theology from the Pontifical Gregorian University.

He was appointed bishop of the Diocese of Cheyenne, Wyoming, by Pope Benedict XVI in 2009. Pope Francis appointed him archbishop of Anchorage in 2016.

The 33 parishes and missions of the Archdiocese of Anchorage are spread over more than 138,000 square miles. The estimated Catholic population there — 32,000 — is about 5 percent of Western Washington’s.

“I have no illusions: This appointment is going to require me to learn new ways of leadership. It’s a much bigger experience of church than I’ve ever been a part of,” Archbishop Etienne said.

“I love nature, and that’s one part that I’m really looking forward to, with the Cascades and all the other beauty of the waters — it just looks like a beautiful part of God’s creation.”

He added, “I do love to get out and walk the trails, and I’ll be doing a lot of that, I hope, in my first several years.”

He also will bring a passion for proclaiming the Gospel to the Archdiocese of Seattle.

“The primary place in my ministry as a priest and bishop where I experience the grace of God most is in preaching,” he said.

“I love to preach. I love the challenge. I’m still intimidated by the challenge of preaching. But I’m convinced that, more and more in our world today, our people need to hear the good news of the Gospel. They need to hear of Jesus Christ and the gift of salvation and mercy that he brings to everyone.”

Shortly after becoming a bishop, he started a blog called “Truth in Love” (his episcopal motto) as a “virtual pulpit” and he uses Facebook and Twitter to try to reach more people with the good news.

The archbishop has used his blog to address the clergy sex abuse crisis. He is a former member of the U.S. bishops’ Committee for the Protection of Children and Young People, and he has been outspoken about the need for greater accountability and transparency.

Last summer, he posted seven proposals “for further study and review,” including updating the Dallas Charter to hold bishops to the same standards as priests and creating a national review board to handle accusations of abuse against bishops.

As bishop of Cheyenne, he placed restrictions on the public ministry of one of his predecessors, Bishop Joseph H. Hart, and asked the Vatican’s Congregation for the Doctrine of the Faith to investigate claims that he sexually abused minors.

“I promise the people of God of Seattle that I will continue to be transparent and responsible,” he said.

Archbishop Etienne acknowledged his excitement about his appointment to Seattle is “tinged with mixed emotions” about leaving the people of Anchorage. But he said wherever the Lord leads him, he is at peace.

“I am who I am by the grace of God,” he said, “and that’s all I really need to know, and that’s the true source of any good that I do.”