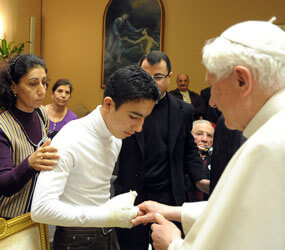 VATICAN CITY – Pope Benedict XVI met privately Dec. 1 with two dozen Iraqis who were injured when their cathedral in Baghdad was attacked Oct. 31.

In early November, the Italian foreign ministry arranged for 26 injured Iraqis – including three children – and 21 accompanying family members to fly to Rome. The injured were treated at the Gemelli Hospital and their family members were housed in apartments belonging to the Catholic University of the Sacred Heart, which operates the hospital.

Nicola Cerbino, hospital spokesman, said Dec. 1 that only two of the injured were still hospitalized, but they were well enough to travel with their family members to the Vatican for the brief audience with the pope.

The entire Iraqi group – close to 50 people – will remain guests of the university until mid-December, Cerbino said. After that, the Italian foreign minister will help them return home or settle elsewhere, he said.

Fifty-eight people died in the attack on the Syrian Catholic church in Baghdad Oct. 31 after military officials tried to end a terrorist siege of the church.