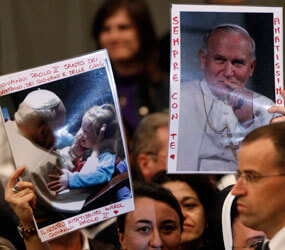 VATICAN CITY – Pope John Paul II was a model of untiring love for God and for all men and women, Pope Benedict XVI said as he celebrated a memorial Mass for his predecessor.

“The entire life of the venerable John Paul II unfolded under the sign of this love, this ability to give himself generously without reserve, without measure and without calculation,” Pope Benedict said March 29 during his homily at the Mass in St. Peter’s Basilica.

The Mass was celebrated in advance of the fifth anniversary of Pope John Paul’s death April 2, because the date fell on Good Friday this year.

Using the Mass readings for March 29, Pope Benedict said Pope John Paul had many of the same traits as the “suffering servant” described in the reading from the Book of Isaiah.

“The servant acts with indestructible firmness, with an energy that does not lessen until he has realized the task he was assigned,” the pope said. “He presents himself with the strength of his convictions and it will be the Holy Spirit that God places in him who gives him the ability to act with meekness and strength, assuring his success in the end.”

“That which the inspired prophet says can be applied to our beloved John Paul II: the Lord called him to his service and, entrusting him with increasingly greater responsibility, accompanied him with his grace and his constant assistance.”

“During his long pontificate, he did all he could to proclaim justice with firmness, without weakness or hesitation, especially when he faced resistance, hostility and refusal,” the pope said.

Pope Benedict said his predecessor knew he was being led by God “and this allowed him to exercise a very fruitful ministry, for which, once again, we give fervid thanks to God.”

The pope also spoke about the Gospel story of Mary of Bethany anointing the feet of Jesus with perfumed oil.

The gesture, he said, was an expression of faith and great love, an offering of profound devotion and of giving a great gift without thinking of the cost.

“Love does not calculate, does not measure, does not count the cost and does not erect barriers, but knows how to give with joy, seeks only the good of the other and overcomes pettiness, stinginess, grudges and the closure that men sometimes carry in their hearts,” the pope said.

“That which motivated him was love for Christ, to whom he had consecrated his life, a love that was superabundant and unconditional,” the pope said.

Pope Benedict said Pope John Paul was sure about God’s goodness and that certainty accompanied him throughout his life and marked the end of his life in a particular way.

“In fact, his progressive physical weakness never dented his rock-solid faith, his shining hope, his fervent love,” the pope said.

“He let himself be used up for Christ, for the church and for the whole world; his was a suffering lived for love and with love until the very end,” Pope Benedict said.

Pope Benedict also read a paragraph of his homily in Polish, urging the Polish people to transform their pride in Pope John Paul into a commitment to following his example of faith, hope and love.

After weeks of increasingly tough questions about Pope Benedict’s role in handling accusations of sex abuse against clergy, the Mass included a prayer in German that he would continue to minister “with persevering meekness and firmness.”

The prayers of the faithful also included a petition in Polish for Pope John Paul, “who served the church to the extreme limits of his strength.”

During the Mass, Pope Benedict did not mention Pope John Paul’s sainthood cause. In December, he formally decreed that Pope John Paul had heroically lived the Christian virtues and was venerable.

Before Pope John Paul can be beatified, the pope also must sign a decree recognizing a miracle attributed to the late pope’s intervention. The reported healing of a French nun suffering from Parkinson’s disease is still being investigated by a team of physicians and theologians.