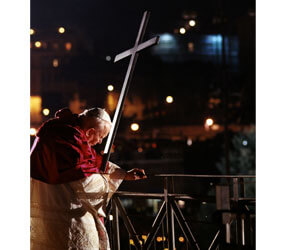 VATICAN CITY – Pope John Paul II always took penitence seriously, spending entire nights lying with his arms outstretched on the bare floor, fasting before ordaining priests or bishops and flagellating himself, said the promoter of his sainthood cause.

Monsignor Slawomir Oder, postulator of the late pope’s cause, said Pope John Paul used self-mortification “both to affirm the primacy of God and as an instrument for perfecting himself.”

The monsignor spoke to reporters Jan. 26 at the launch of his book, “Why He’s a Saint: The Real John Paul II According to the Postulator of His Beatification Cause.”

Earlier in the day, two Italian news Web sites reported that an October date had been set for Pope John Paul’s beatification, but Monsignor Oder said nothing could be confirmed until physicians, theologians and cardinals at the Congregation for Saints’ Causes accept a miracle credited to the late pope’s intercession and Pope Benedict formally signs a decree recognizing it.

Monsignor Oder’s book, published only in Italian, is based largely on what he said he learned from the documents collected for the beatification process and, particularly, from the sworn testimony of the 114 people who personally knew Pope John Paul and testified before the Rome diocesan tribunal investigating his fame of holiness.

Because of the reticence surrounding the process, the witnesses who served as the source for particular affirmations in the book are not named, although some are described loosely as members of the papal entourage or the papal household.

“When it wasn’t some infirmity that made him experience pain, he himself would inflict discomfort and mortification on his body,” Monsignor Oder wrote.

He said the penitential practices were common both when then-Karol Wojtyla was archbishop of Krakow, Poland, as well as after he became pope.

“Not infrequently he passed the night lying on the bare floor,” the monsignor wrote, and people in the Krakow archbishop’s residence knew it, even if the archbishop would mess up the covers on his bed so it wouldn’t be obvious that he hadn’t slept there.

“As some members of his closest entourage were able to hear with their own ears, Karol Wojtyla flagellated himself both in Poland and in the Vatican,” Monsignor Oder wrote. “In his closet, among the cassocks, there was a hook holding a particular belt for slacks, which he used as a whip and which he also always brought to Castel Gandolfo,” the papal summer residence south of Rome.

In the book, Monsignor Oder said Pope John Paul firmly believed that he was doing what St. Paul professed to do in the Letter to the Colossians: “In my flesh I am filling up what is lacking in the afflictions of Christ.”

He also said the pope, who had a notorious sweet tooth, was extremely serious about maintaining the Lenten fast and would lose several pounds before Easter each year, but he also fasted before ordaining priests and bishops and for other special intentions.

Monsignor Oder’s book also marked the publication for the first time of letters Pope John Paul prepared in 1989 and in 1994 offering the College of Cardinals his resignation in case of an incurable disease or other condition that would prevent him from fulfilling his ministry.

For years there were rumors that Pope John Paul had prepared a letter instructing cardinals to consider him resigned in case of incapacity.

But even a month before his death in April 2005, canon law experts in Rome and elsewhere were saying the problem with such a letter is that someone else would have to decide when to pull it out of the drawer and apply it.

Church law states that a pope can resign, but it stipulates that papal resignation must be “made freely and properly manifested” – conditions that would be difficult to ascertain if a pope were already incapacitated.

Monsignor Oder wrote that in Pope John Paul’s 1994 letter the stressed syllables in spoken Italian are underlined, making it appear that the pope had read it or was preparing to read it to the College of Cardinals.

The 1989 letter was brief and to the point; it says that in the case of an incurable illness that prevents him from “sufficiently carrying out the functions of my apostolic ministry” or because of some other serious and prolonged impediment, “I renounce my sacred and canonical office, both as bishop of Rome as well as head of the holy Catholic Church.”

In his 1994 letter the pope said he had spent years wondering whether a pope should resign at age 75, the normal retirement age for bishops. He also said that, two years earlier, when he thought he might have a malignant colon tumor, he thought God had already decided for him.

Then, he said, he decided to follow the example of Pope Paul VI who, in 1965, concluded that a pope “could not resign the apostolic mandate except in the presence of an incurable illness or an impediment that would prevent the exercise of the functions of the successor of Peter.”

“Outside of these hypotheses, I feel a serious obligation of conscience to continue to fulfill the task to which Christ the Lord has called me as long as, in the mysterious plan of his providence, he desires,” the letter said.