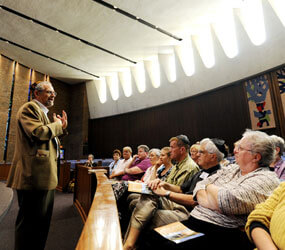 ROCHESTER, N.Y. – While the groundwork for improving Catholic-Jewish relations was laid out in the Second Vatican Council document “Nostra Aetate,” Pope John Paul II showed Catholics how to carry out the intentions of the document’s authors, said a priest who serves as a consultant on ecumenical and interreligious affairs to the U.S. Conference of Catholic Bishops.

Father Dennis McManus explained how Pope John Paul’s visionary thinking breathed life into the groundbreaking document, which served as the starting point for improved relations between Catholics and Jews.

He spoke during an Aug. 24 workshop at the Anti-Defamation League’s three-day Bearing Witness Summer Institute for Educators at St. Bernard’s School of Theology and Ministry.

“Nostra Aetate,” the council’s declaration on relations with non-Christian religions, addresses several main points regarding the religious basis of anti-Judaism, said Father McManus, who also is a visiting professor of theology at Georgetown University in Washington.

“We respect and honor that covenant,” he explained. “Even as the Christian finds the fullest experience in Christ, it does not eliminate validity in Mosaic law.”

“Nostra Aetate” also stated that God does not regard Jews with contempt and they remain his chosen people, and that anti-Semitism is racist as a philosophy and has no place in Christianity, Father McManus said.

Pope John Paul apologized for any violence done against the Jews and wrote out a prayer that he placed in the Western Wall of Jerusalem, the priest said.

“It was astounding,” Father McManus said of Pope John Paul’s actions. “He was the first (pope) in the modern period to establish full diplomatic relations between the Vatican and Israel. He tried to reconcile the Catholic Church with Jews and Judaism. It was incredible.”

In a second presentation a day later, Father McManus said “Nostra Aetate” tried to correct common errors that many Catholics have about Jews and Judaism.

“It tries to say to Catholics that Jews are God’s beloved, chosen people, that their validity, and life and identity come from God, and we must respect that, and that anything short of that is anti-Semitism, and that is deeply sinful,” Father McManus said.

These lessons from “Nostra Aetate” can be very hard for some Catholics to come to terms with, the priest said. “It has been a centuries-long struggle, but the message is as vital as it was 44 years ago,” he said.

To counteract anti-Semitism, Catholics need to be educated on the Judaism of Jesus, the theology professor added.

“Once they understand that, they embrace the importance of Judaism as part of their own redemption,” he said. “Catholicism teaches that God has yet to work out his full plan of salvation for his world, and the Jews are an important part of that plan.”

Kenneth Jacobson, ADL’s deputy national director, addressed anti-Semitism’s long and complex history, which dates to before the birth of Christ, although it has taken on several transformations over the centuries.

He also cited the progress made in relations between Jews and Catholics in the last 50 years that has fostered an “open, honest conversation” to take place while allowing Catholics, as well as all Christians, to understand Judaism, the root of Christianity.

Anti-Semitism shares some but not all characteristics of other forms of hatred, such as racism, but racism is more of a “what you see is what you get” type of hatred, he explained. Outward appearance often is enough to trigger racial hatred, but that’s not the case with anti-Semitism.

“At the heart, it’s the idea that the Jews seem to be regular people like you and me, but that’s not the reality of the Jew. The (perceived) reality of the Jew is something hidden, something sinister, something powerful,” he said. “Once you establish that reality is not what it seems to be … then in almost any situation someone can stand up and say, ‘The real reason you’re suffering is because of the hidden power of the Jews.’“

It’s difficult, then, for anti-Semites to be dissuaded from their positions by logical arguments, since they believe the reality of the Jews is not what it appears to be, he added.

“That helps you explain why anti-Semitism is so enduring. Any time there’s a problem, somebody can seize on this issue and know there’s a long history of that and say, ‘Oh, that’s why you’re suffering,’“ Jacobson said.