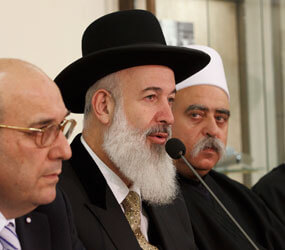 VATICAN CITY – Dialogue is essential for religious leaders in the Holy Land, “a place full of memories sacred to our traditions,” but a place that each day faces challenges to living together in harmony, Pope Benedict XVI told religious leaders from Israel.

The “movement toward reconciliation requires courage and vision, as well as the trust that it is God himself, who will show us the way,” the pope said Nov. 10 as he welcomed members of the Israel Council of Religious Communities and several Israeli government representatives.

The pope had met with council members when he visited Nazareth in 2009 and he invited them to the Vatican.

The council was established in 2007 and brings together leaders of 18 different religious communities, including Jewish, Muslim, Christian, Druze, Samaritan and Bedouin leaders. The Christians on the council represent the Greek, Armenian, Coptic and Ethiopian Orthodox communities, the Anglicans and the Latin-rite, Armenian, Maronite and Melkite Catholic communities, as well as the Franciscan Custody of the Holy Land.

Israeli Chief Ashkenazi Rabbi Yonah Metzger told the pope the group intends “to prove, once and for all, that we can live in peace; we do so in mutual respect and appreciation.”

Archbishop Fouad Twal, Latin Catholic patriarch of Jerusalem, told the pope: “We do not want this meeting to be merely a show. We earnestly renew our commitment to continuously promote justice, peace (and) respect for the dignity of every human being.”

He said the religious leaders are “acutely aware” of the limitations of their ability to influence the international and regional diplomatic activity trying for decades to bring peace to the Middle East. However, he said, “as a religious council, we are aware of the power of faith and prayer and our responsibility to do more for reconciliation among our local communities.”

“Though the problems we face are numerous, many resulting from a seemingly intractable conflict or a culture of violence, even so we, as members of this religious council, do not have the right to despair, to be tired or to give up,” Patriarch Twal told the pope.

Sheik Mouafak Tarif, head of Israel’s Druze community, told the pope that promoting brotherhood and rejecting violence and other attacks on human dignity are objectives held in common by the region’s religions. And, he said, the trip to Rome gave the religious leaders the time and space they needed to discover more about their commonalities and to build their friendships.

Sheik Mohamad Kiwan, head of the 340 Muslim imams serving mosques in Israel, asked the pope to help promote peace in the land so many religions consider sacred, a land “where at the same time, the shofar is blown, the church bells ring and the voice of the muezzin calls to prayer.”

In his speech to the group, Pope Benedict said, “In our troubled times, dialogue between different religions is becoming ever more important” for generating “an atmosphere of mutual understanding and respect that can lead to friendship and solid trust in each other.”

“Justice, together with truth, love and freedom, is a fundamental requirement for lasting and secure peace in the world,” he said.

Religious leaders have a responsibility to teach their faithful that a right relationship with God is a force for peace, which must be obvious in the way believers live and interact with others, he said.

After the papal meeting, members of the council held a news conference. Rabbi Ratzon Arusi, chief rabbi of Kiryat Ono, Israel, said that in addition to trying to lead people to faith, Israel’s religious leaders are trying to promote “a belief in peace” among people who are weary of conflict, but suspicious of promises of change.

Melkite Archbishop Elias Chacour of Haifa told reporters that he and other members of the council are convinced their religious traditions can be “part of the solution and no longer part of the conflict.”