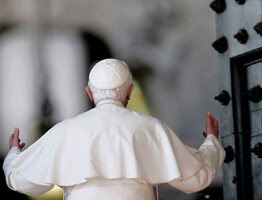 “I express my heartfelt wish that those who enter through the bronze doors may feel, from the moment of their entrance, welcomed by the pope’s embrace,” he told Vatican officials, Swiss Guards, the restorers and the benefactors who paid for the two-year project.

The doorway is more than 24 feet tall and 13 feet wide, according to the Vatican press office. The doors, which have a steel core between the interior wood panel and the exterior bronze panel, weigh 12,130 pounds. The two keys given to the pope in a white silk-lined box are each about eight inches long.

Instead of walking down the stairs from his apartments to bless the new doors, Pope Benedict was driven through the Vatican Gardens and through St. Peter’s Square, to the delight of unsuspecting tourists and pilgrims.

Swiss Guards stood at attention on either side of the doorway, the main visitors’ entrance to the papal reception rooms, the Prefecture of the Pontifical Household and the Vatican Secretariat of State.

Wearing their white lab coats, the technicians who carried out the restoration work lined the stairway leading to the doors.

U.S. Archbishop John P. Foley, pro-grand master of the Knights of the Holy Sepulcher, and members of the Catholic chivalric order greeted the pope. The knights, along with an Italian bank, funded the restoration.

The pope thanked the knights and the bank for their “expression of fidelity to the supreme pontiff and (their) attention to the artistic goods of the Holy See.”

The doors, made from wood and bronze taken from ancient Roman temples, were put in place by Giovanni Lorenzo Bernini, the architect of the colonnade surrounding St. Peter’s Square. The bronze doors are at the northwest end of the colonnade.