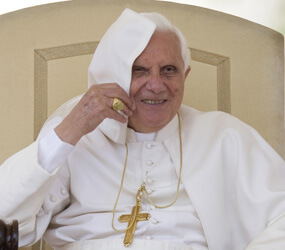 VATICAN CITY – Pilgrims from all over the world treated Pope Benedict XVI to an early birthday celebration during his April 15 weekly general audience in St. Peter’s Square.

Before the pope gave a summary of his catechesis in English, audience members broke into a spontaneous rendition of “Happy Birthday, dear Benedict” followed by an encore with musical accompaniment by a Bavarian band present in the square. The pope smiled widely, waved and stood in appreciation.

Smaller groups of pilgrims also sang birthday greetings in their native languages at different moments during the audience. The pope was to celebrate his 82nd birthday April 16 and to mark the fourth anniversary of his election as pope April 19.

Pope Benedict arrived at the Vatican by helicopter from Castel Gandolfo, south of Rome, and returned to the papal villa by helicopter after the audience.

St. Peter’s Square was still decorated with some of the tulips, daffodils, pansies and flowering trees that were set up for the pope’s Easter morning Mass April 12.

The pope used his weekly general audience to underline the importance of celebrating the 50-day Easter season.

This festive, joyous period celebrates Christ’s definitive triumph over evil and death, the pope told the estimated 30,000 people in the square.

“To proclaim the resurrection of Jesus of Nazareth as a real, historic event, attested to by many authoritative witnesses, is so fundamental to our faith and our Christian testimony,” he said.

It’s important to strongly assert the veracity of this historical event, he said, because today “there is no lack of people who try to negate the historicity (of Christ’s resurrection), reducing the Gospel account to a myth or a vision of the apostles, and spreading old and worn-out theories as new and scientific.”

Jesus’ resurrection was not simply a coming back to life like, for example, Lazarus being raised from the dead, said the pope.

Jesus’ resurrection marks “an entrance into a new dimension of life meant to transform every human being, all of history and the whole cosmos,” he said.

“It illuminates our entire earthly pilgrimage including the human enigma of pain and death,” he said.

“Faith in the crucified and risen Christ lies at the heart of the whole Gospel message and is the central nucleus of our belief,” said Pope Benedict.

Jesus is gloriously alive “because he conquered the power of death and brought humanity to be in communion with God,” he said.

While the Resurrection is celebrated every Sunday all year long, Catholics should focus on its meaning and rejoice over it more intensely in the days immediately following Easter, the pope said.

He asked the faithful to bathe in the brilliant light of the resurrected Christ and to recognize that this joy is something that must be shared.

“We cannot keep this truth that changes everyone’s life just for ourselves: We have to be witnesses of divine love,” he said.

The text of the pope’s audience remarks in English will be posted online at:

The text of the pope’s audience remarks in Spanish will be posted online at: