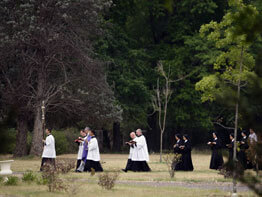 VATICAN CITY – Pope Benedict XVI and German Chancellor Angela Merkel spoke to each other on the telephone about the recent controversy surrounding a traditionalist bishop who has denied the Holocaust.

“It was a cordial and constructive conversation, marked by a common and profound agreement that the Shoah is a perpetually valid warning for humanity,” said a statement released Feb. 8 by the spokesmen for the pope and for Chancellor Merkel.

Jesuit Father Federico Lombardi, papal spokesman, said the phone conversation was marked by “a climate of great respect” and included mention of Pope Benedict’s Jan. 28 statement about the importance of remembering the Holocaust and Merkel’s Feb. 3 request that the Vatican make it clear that it would not tolerate Holocaust denial.

The controversy began in late January when a television station aired a November interview with Bishop Richard Williamson, who was excommunicated in 1988 after being ordained against papal orders. The late French Archbishop Marcel Lefebvre, who ordained him, and three other bishops ordained at the same ceremony also were excommunicated.

The interview aired just before the Vatican published the news that Pope Benedict had signed a decree lifting the excommunications of the four bishops.

The Vatican Secretariat of State issued a further statement Feb. 4, the day after Chancellor Merkel’s public request, stating that Bishop Williamson would not be received into full communion with the church unless he disavowed in “an absolutely unequivocal and public manner” his statement that reports of 6 million Jews dying in the Holocaust were an exaggeration and that no Jews died in Nazi gas chambers.

In an interview published Feb. 7 by the German magazine Der Spiegel, Bishop Williamson said he was willing to review the historical evidence about the Holocaust, and “if I find this evidence, I will correct myself. But that will take time.”

Bishop Williamson e-mailed Der Spiegel from Argentina where he had been the head of the seminary of the Society of St. Pius X in La Reja for the past five years.

The Argentine newspaper La Nacion reported Feb. 8 that Bishop Williamson has been removed as the rector of the seminary.

In the meantime, Father Davide Pagliarani, superior of the society’s Italian district, issued a statement Feb. 6 saying that another Holocaust denier, Father Floriano Abrahamowicz, had been expelled from the Society of St. Pius X.

As the controversy surrounding Bishop Williamson grew in late January and early February, Father Abrahamowicz gave several interviews in which he, too, denied the Holocaust and in which he claimed that the Nazi gas chambers were used to disinfect inmates upon arrival at Nazi concentration camps.

The Society of St. Pius X was founded in 1969 by Archbishop Lefebvre. It does not accept the liturgical reforms of the Second Vatican Council and its concepts of religious freedom and ecumenism.

Pope Benedict was scheduled to meet Feb. 12 with more than 60 U.S. Jewish leaders, members of the Conference of Presidents of Major American Jewish Organizations.

A Vatican official told Catholic News Service Feb. 9 that the group had requested the papal audience before the Bishop Williamson controversy erupted, but that obviously the German-born pope would use the occasion to reaffirm his respect for the Jews and his position that the Holocaust was real and that it was a horrific proof of the existence of evil.

Top officers of the World Jewish Congress met at the Vatican Feb. 9 with Cardinal Walter Kasper, president of the Pontifical Commission for Religious Relations With the Jews.

Ronald S. Lauder, president of the congress, said in a statement that he and the other officers told Cardinal Kasper that the Vatican’s insistence that Bishop Williamson recant “was a welcome first step,” but that concrete actions must be taken to emphasize that the Catholic Church itself will not tolerate “accommodating anti-Semites.”

Lauder said he hoped the pope would be able to make his planned May visit to Jordan, Israel and the Palestinian territories.

“We are looking forward to the pope’s visit to the Holy Land,” he said. “This will be an opportunity to reaffirm the Vatican’s commitment to dialogue with Jews.”