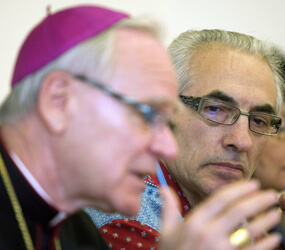 VATICAN CITY – In a step toward reconciling a long-standing historical injustice, Pope Benedict XVI expressed his sorrow for the suffering of Canadian aboriginal children over decades in church-run residential schools.

The pope met at the Vatican April 29 with a delegation of native Canadians representing those who had suffered forced acculturation and in some cases physical and sexual abuse at the government schools, many run by Catholics, and listened to their grievances.

He expressed his “sorrow at the anguish caused by the deplorable conduct of some members of the church and offered his sympathy and prayerful solidarity,” a Vatican statement said after the meeting, which followed the regular weekly papal audience.

“His Holiness emphasized that acts of abuse cannot be tolerated in society. He prayed that all those affected would experience healing, and he encouraged First Nations peoples to continue to move forward with renewed hope,” the Vatican statement said.

Phil Fontaine, grand chief of the Assembly of First Nations of Canada and a former student of an Indian residential school, said group members “heard what we came for” and were “very happy” with the meeting and the response of Pope Benedict.

“We hoped to hear the Holy Father talk about the residential school experience, but also about abuses and hurts inflicted on so many and to acknowledge the role of the Catholic Church,” Fontaine said in a news conference following the meeting. “We wanted to hear him say that he understands and that he is sorry and that he feels our suffering, and we heard that very clearly.”

Archbishop V. James Weisgerber of Winnipeg, Manitoba, president of the Canadian Conference of Catholic Bishops, headed the group of Canadian clergy and lay Catholics who accompanied the aboriginals.

He said that in the private audience the pope “was very warm” and expressed “his regret, his sorrow and his pain at what happened to the aboriginal people” in some of the residential schools and especially “great regret for the involvement of people in the church.”

Fontaine said the meeting with the pope brought him and others who suffered in the residential schools closer to “closing the circle” with regard to the painful legacy that saw thousands of children taken from their families and forced to abandon their language, customs and religion and adopt a European lifestyle.

An estimated 100,000 aboriginal children passed through these schools, which were abolished in the 1990s. They were established and paid for by the Canadian government in the late 1800s, but were administered by various church organizations. Some 75 percent were run by Roman Catholic dioceses or religious communities, while the others were operated through the Anglican, United and Presbyterian churches.

The Canadian government made a formal apology last summer, and the other denominations have all apologized.

“We were looking for a similar apology from the Catholic Church,” Fontaine said, “and I was a witness to that today.”

Archbishop Weisgerber has helped lead the church’s effort to address the tragedy of those who suffered, at the least, separation from their families and culture and, at worst, oppression, violence and sexual and psychological abuse.

The archbishop spoke of the “long and rich relationship between the Catholic Church in Canada and the First Nations” but said that “people began coming forward with stories of physical and sexual abuse and of cultural abuse” in the Catholic schools.

He said the church in Canada was committed to healing the wounds created by the experience and that “as Canadians we need many of the values of the people of the First Nations.”

Fontaine said “we are here at the invitation of the pope,” adding that he and the approximately 40 members of his delegation “didn’t come here expecting … a major public statement. We heard what we came here to hear. … I will leave here very happy.

“I was very pleased and encouraged by the spirit of good will and I sense a real commitment on the part of the Catholic Church to rebuild this relationship,” he said.