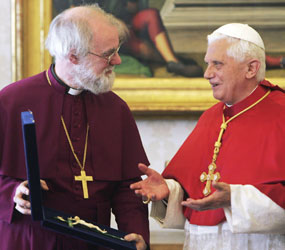 VATICAN CITY – Pope Benedict XVI has established a special structure for Anglicans who want to be in full communion with the Roman Catholic Church while preserving aspects of their Anglican spiritual and liturgical heritage, said U.S. Cardinal William J. Levada.

The cardinal, prefect of the Congregation for the Doctrine of the Faith, said a new apostolic constitution would establish “personal ordinariates” – similar to dioceses – to oversee the pastoral care of those who want to bring elements of their Anglican identity into the Catholic Church with them.

Anglican priests who are married may be ordained Catholic priests, but married Anglican bishops will not be able to function as Catholic bishops in keeping with the long-standing Catholic and Orthodox tradition of ordaining only unmarried clergy as bishops, Cardinal Levada said.

The cardinal announced the new arrangement at a press conference Oct. 20 at the Vatican. He said the pope’s apostolic constitution and norms for implementing it were undergoing final revisions and would be published in a couple of weeks.

In establishing the new jurisdictions, Pope Benedict is responding to “many requests” submitted by individual Anglicans and by Anglican groups – including “20 to 30 bishops” – asking to enter into full communion with the Catholic Church, the cardinal said.

At the same time, Cardinal Levada said the new provision does not weaken the commitment of the Vatican to promoting Christian unity, but is a recognition that many Anglicans share the Catholic faith and that Anglicans have a spiritual and liturgical life worth preserving.

But given recent changes within many Anglican provinces with the ordination of women priests and bishops and the acceptance of homosexuality in some areas, the prospect of full unity “seemed to recede,” he said.

The church recognizes and welcomes those Anglicans who fully share the Catholic faith, agree with the Catholic view that only men can be ordained priests and recognize the role of the bishop of Rome – the pope – as the sign and guarantor of church unity, he said.

At a press conference in London Oct. 20, Anglican Archbishop Rowan Williams of Canterbury, head of the Anglican Communion, and Archbishop Vincent Nichols of Westminster, president of the Catholic Bishops’ Conference of England and Wales, issued a joint statement saying the new provisions are a recognition of “the substantial overlap in faith, doctrine and spirituality between the Catholic Church and the Anglican tradition.”

“Without the dialogues of the past 40 years, this recognition would not have been possible, nor would hopes for full visible unity have been nurtured,” the two leaders said.

Cardinal Levada told reporters he met personally Oct. 19 with Archbishop Williams, who had been told about the new arrangement a month earlier.

In a letter to top Anglican leaders, Archbishop Williams said, “In the light of recent discussions with senior officials in the Vatican, I can say that this new possibility is in no sense at all intended to undermine existing relations between our two communions or to be an act of proselytism or aggression. It is described as simply a response to specific inquiries from certain Anglican groups and individuals wishing to find their future within the Roman Catholic Church.”

“For those who wish to enter into full communion with the Roman Catholic Church in the near future, this announcement will clarify possible options, and we wish them God’s strength and guidance in their discernment,” the Anglican leader said.

Cardinal Levada also said Cardinal Walter Kasper, president of the Pontifical Council for Promoting Christian Unity, had been informed about the pope’s decision.

Asked Oct. 15 about the possible entrance of groups of former Anglicans into the Catholic Church, Cardinal Kasper said, “We are not fishing in the Anglican lake; proselytism is not the policy of the Catholic Church. But if there are people who, obeying their consciences, want to become Catholic, we cannot shut the door.”

U.S. Archbishop J. Augustine Di Noia, secretary of the Congregation for Divine Worship and the Sacraments and former undersecretary of the doctrinal congregation, spoke at the press conference with Cardinal Levada.

“We have been praying for unity for 40 years. We find now that the prayers we have had are being answered in a way that we did not anticipate. So the Holy Spirit is at work here and the Holy See cannot not respond,” the archbishop said.

In 1993 the Catholic bishops of England and Wales asked the Vatican not to implement special structures for former Anglicans in their country, saying that the formation of Anglican-identity Catholic parishes would only further fracture the Christian community and would make the eventual unity of the Catholic Church and Anglican Communion more difficult.

Archbishop Di Noia said, “The ecumenical movement has changed. There has been a tremendous shift” in the prospects for full, complete union.

Many Anglicans already consider themselves to be Catholic, Archbishop Di Noia said, and the pope’s new initiative will make “explicit the bond that is already implicit.”

In 1980 the Vatican made a special pastoral provision for members of the Episcopal Church, the U.S. province of the Anglican Communion, who wanted to become Catholic after the Episcopalians began ordaining women priests. The provision included permission for entire parishes of former Episcopalians to use elements of their liturgy in the Catholic Mass.

Archbishop Di Noia said only a handful of parishes took advantage of that special permission, and in 2003 the Vatican approved “The Book of Divine Worship” for their liturgical use.

But he said many of those now seeking communion with Rome wanted a stronger affirmation of their Anglican heritage and a guarantee that it would continue to have a place in the Catholic Church, which is why the pope ordered the establishment of personal ordinariates.

The number of ordinariates and their headquarters will be determined by the number of Anglicans seeking full communion, Cardinal Levada said. The head of each ordinariate will be a former Anglican clergyman, who will not necessarily be ordained a Catholic bishop.

New priests for the ordinariates will study in seminaries with other Catholic seminarians, but an ordinariate can “establish a house of formation to address the particular needs of formation in the Anglican patrimony,” Cardinal Levada said.

But an unmarried man ordained a Catholic priest will not be permitted to marry, and the pope’s apostolic constitution will state a clear preference for a celibate clergy, Archbishop Di Noia said.

Cardinal Levada told reporters that he realizes “for some people it seems to be a problem” that the Vatican is allowing married former Anglicans to be ordained Catholic priests, but will not allow Catholic priests who have left to marry to return to ministry.

“They are two different circumstances,” the cardinal said. Respecting “the authenticity of the call to service” of Anglican clergy who were married when they came to the decision to become Catholic is different from the case of “a Catholic who knowingly commits to a celibate priesthood and then decides for different reasons to leave the priesthood for married life.”

“I do not think it is an insurmountable problem,” Cardinal Levada said, adding that the church needs to educate Catholics that the dispensation for former Anglican clergy is an exception and that the church continues to uphold the virtue of celibacy.