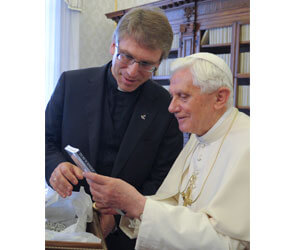 VATICAN CITY – The Rev. Olav Fykse Tveit, general secretary of the World Council of Churches, gave Pope Benedict XVI a wooden box carved in Syria as a sign of ecumenical concern for the fate of Christians in the Middle East.

“We had a very open and friendly conversation,” Fykse Tveit told Vatican Radio. He said the pope emphasized the importance of the World Council of Churches, particularly on theological issues and in strengthening the visible unity of Christian churches through cooperation on a wide variety of issues.

The WCC represents 349 Orthodox, Anglican and Protestant communities around the world. The Catholic Church is not a member of the council, although it does participate in many council activities, including the WCC’s Faith and Order Commission, which deals with theological issues.

Fykse Tveit told Vatican Radio that he hoped the celebration Jan. 18-25 of the Week of Prayer for Christian Unity would draw the attention of all the world’s Christians to the special role and unique challenges facing Christians in the Middle East.

The theme for the week is: “One in the apostles’ teaching, fellowship, breaking of bread and prayer.” Christians in Jerusalem prepared the materials for the 2011 celebration.

“I hope this week will help us see that Christians in the Holy Land are not only there to steward museums, but they have a very special place in world Christianity and I hope this can strengthen all of us in accompanying them but also to learn from them,” Fykse Tveit told the radio.

In addition to giving the pope the box from Syria, he said he gave the pope a pair of warm wool gloves as a sign that “winter can be beautiful, too” and a book of poetry, “The Dream We Carry” by the Norwegian poet Olav Hauge.