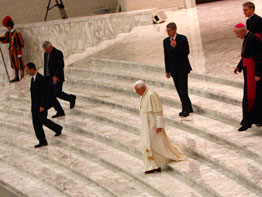 VATICAN CITY – Calling St. Augustine “one of the greatest converts in Christian history,” Pope Benedict XVI said the writings of the North African bishop have had a huge influence on his life as a priest and theologian.

At his Feb. 27 general audience, the pope spoke of his “personal devotion and recognition before a figure to whom I feel very closely tied because of the part he played in my life as a theologian, priest and pastor.”

In addition, the pope said both his 2006 encyclical, “Deus Caritas Est” (“God Is Love”), and his 2007 encyclical, “Spe Salvi” (on Christian hope), were influenced heavily by the work of St. Augustine.

Concluding a series of audience talks about the doctor of the church who lived from 354 to 430, Pope Benedict focused on what he said were the three stages in St. Augustine’s conversion.

“From the beginning, St. Augustine was a passionate seeker of the truth and remained so for his whole life,” the pope said.

His conversion began with a “progressive drawing near to Christ,” to whom he was introduced by his mother, St. Monica, Pope Benedict said.

“Even though during his youth he lived an errant life, he always felt a deep attraction to Christ,” he said.

His esteem for reason and his search for truth led him to study philosophy, but it did not hold all the answers to his questions, the pope said.

The turning point came when he read St. Paul’s Letter to the Romans, which tells people to abandon the works of the flesh and cloth themselves with Christ, he said.

“He understood that this verse at that moment was addressed personally to him,” Pope Benedict said.

His conversion “culminated in baptism, but did not conclude there,” the pope said, because following Jesus is a lifelong process of drawing nearer to him.

Pope Benedict said Christ was the key to St. Augustine’s search for truth and his search for God, who appeared to be far off and beyond human reach. But St. Augustine realized that in Christ God “is near. He drew close to us by becoming one of us,” he said.

“Only God, who made himself touchable, one of us, is a God to whom one can pray, a God for whom and with whom one can live,” the pope said.

After his baptism in 387, St. Augustine returned to Africa and founded a small monastery with some friends. The second stage of his conversion, the pope said, consisted in giving up his “beautiful dream” of dedicating his life to prayer and study by being ordained to the priesthood and assigned to pastoral work.

The pope said the third stage of St. Augustine’s conversion was realizing that each day he must ask God’s forgiveness for his sins and renew his commitment to following Christ.

“We always need to be washed by Christ,” and to humbly recognize “that we are sinners,” the pope said.