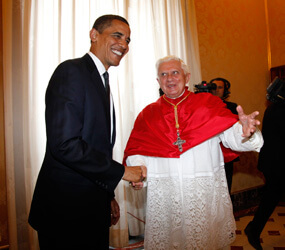 In addition to giving Obama a copy of his latest encyclical, which the pope had been presenting to visiting heads of state since its release July 7, the pope also presented a copy of the Vatican document on biomedical ethics, “Dignitas Personae” (“The Dignity of a Person”).

When presenting the gifts after their 35-minute closed-door meeting, the pope gave Obama a signed, white leather-bound copy of the encyclical, “Caritas in Veritate” (“Charity in Truth”), then indicated the light-green soft-cover instruction on bioethics issued last December by the Vatican Congregation for the Doctrine of the Faith.

“Oh, what we discussed earlier,” said Obama, referring to their closed-door discussions. “I will have some reading to do on the plane.”

Obama was given the instruction to help him better understand the church’s position on bioethics, Monsignor Georg Ganswein, papal secretary, told journalists in the pool covering the visit.

Obama arrived at the Vatican shortly before 4 p.m., and a squad of Swiss Guards saluted him in the St. Damasus Courtyard of the Apostolic Palace.

U.S. Archbishop James Harvey, prefect of the papal household, was the first to greet the president, and he accompanied Obama to a meeting with Cardinal Tarcisio Bertone, Vatican secretary of state.

Pope Benedict and Obama sat at a desk in the papal library and discussed the Group of Eight summit – the meeting of the world’s wealthy industrialized countries, which concluded that morning in L’Aquila, Italy. The summit focused on the economic crisis, climate change and global tensions.

Pope Benedict told the president, “You must be tired after all these discussions.”

Obama responded that the meetings were “very productive” and marked “great progress” and “something concrete,” although the precise topic they were discussing at that point was unclear.

The pope and Obama discussed issues that represent “a great challenge for the future of every nation and for the true progress of peoples, such as the defense and promotion of life and the right to abide by one’s conscience,” according to a Vatican statement released after the audience.

The two men also discussed world issues addressed at the G-8 summit, as well as immigration and the issue of reuniting families, the Vatican statement said.

The meeting with the pope and a separate 20-minute meeting with Cardinal Bertone also touched on international politics, such as the peace process in the Middle East, “on which there was general agreement.”

“Dialogue between cultures and religions, the global economic crisis and its ethical implications, food security, development aid – especially for Africa and Latin America – and the problem of drug trafficking” were discussed, the Vatican said.

“Finally, the importance of educating young people everywhere in the value of tolerance was highlighted,” it said.

At the end of the meeting, Pope Benedict told the president, “A blessing on all your work and also for you.”

The president responded: “Thank you very much. We look forward to building a strong relationship between our countries.”

Father Lombardi said he spoke with the pope after the meeting and the pope “seemed extremely satisfied with how the meeting went.”

He said the pope found Obama to be “attentive and ready to listen.”

“The president explicitly expressed his commitment to reducing the numbers of abortions and to listen to the church’s concerns on moral issues,” he said.

After their closed-door meeting, Obama introduced the pope to his wife, Michelle, their daughters, Malia and Sasha, and Michelle Obama’s mother, Marian Robinson.

There was private exchange of gifts and moment for photographs. The pope gave each of the girls a silver key chain with a bas-relief image of the pope, and Michelle Obama and Robinson each received a papal medal.

In addition to the encyclical and Vatican bioethics document, Pope Benedict gave Obama a mosaic showing St. Peter’s Basilica and Square and a medal marking the fifth year of his pontificate.

The president told the pope the mosaic, which was made in the Vatican’s mosaic studio, “was very beautiful” and would have “a place of honor” in the White House.

The president gave the pope a liturgical stole that had been on the remains of St. John Neumann, the first U.S. male citizen to be proclaimed a saint.

St. John Neumann, Philadelphia’s fourth bishop, is enshrined in a glass casket under an altar at St. Peter the Apostle Church in Philadelphia. New vestments have been placed on his remains four times since his 1860 death – in 1903, 1962, 1989 and 2008.

The pope thanked the president for the gift and looked very pleased, saying the saint had been “a wonderful person.”

The saint was a Redemptorist priest, and the Baltimore province of the order gave Obama the stole, which had been removed from the casket in 2008.

Father Lombardi told pool reporters that giving the pope such a relic was “a sign of care, of sensitivity.”