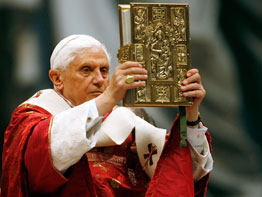 In an age in which sexual activity can become like a drug, people need to be reminded that married love should always involve the whole person and be open to new life, he said May 10.

The pope made his comments as the church prepared to mark the 40th anniversary of the encyclical “Humanae Vitae.” Issued by Pope Paul VI July 25, 1968, it affirmed the church’s teaching on married love and said use of artificial contraception was morally wrong.

Addressing participants of a church-sponsored conference on “Humanae Vitae,” Pope Benedict said the encyclical was a “gesture of courage.” He acknowledged that its teachings have been controversial and difficult for Catholics, but he said the text expressed the true design of human procreation.

“What was true yesterday remains true also today. The truth expressed in ‘Humanae Vitae’ does not change; in fact, in light of new scientific discoveries, its teaching is becoming more current and is provoking reflection,” he said.

The pope said the encyclical correctly explained that married love is based on total self-giving between spouses, a relationship that goes far beyond fleeting pleasures or sentiments.

“How could such a love remain closed to the gift of life?” he said.

The pope said the Christian concept of marriage respects the unity of the person, in body and soul. The alternative, he said, is a culture that considers the body an object that can be bought or sold and in which “the exercise of sexuality is transformed into a drug that wants to subject the partner to one’s own desires and interests.”

“As believers, we can never allow the dominion of the technical to invalidate the quality of love and the sacredness of life,” he said.

The pope said this fundamental view of human life and procreation was something that goes back to the creation of man, and thus represents a paradigm for all generations. It is a key part of natural law that deserves universal respect, he said.

“The transmission of life is inscribed in nature and its laws remain as unwritten norms to which everyone should refer,” he said.

Any attempt to move away from this principle is destined to remain sterile and without a future, he said.

He said it should also be remembered that true love involves a sense of sacrifice, which is part of a married couple’s openness to life.

“No mechanical technique can substitute the act of love that two spouses exchange as a sign of a greater mystery, in which they are protagonists and co-participants in creation,” he said.

The pope said he was concerned that adolescents today are not receiving the kind of sexual formation they need in order to make proper decisions and avoid the “risky implications” of their behavior.

He said it does no honor to free and democratic societies when they offer their young people “false illusions” about their own sexuality. Freedom must be tied to truth and responsibility, he said.

He summed up his talk by saying that the 1968 encyclical should be looked at with a broader perspective.

“The teaching expressed in ‘Humanae Vitae’ is not easy. However, it conforms to the fundamental structure through which life has always been transmitted from the creation of the world, in the respect of nature and in conformity with its demands,” he said.